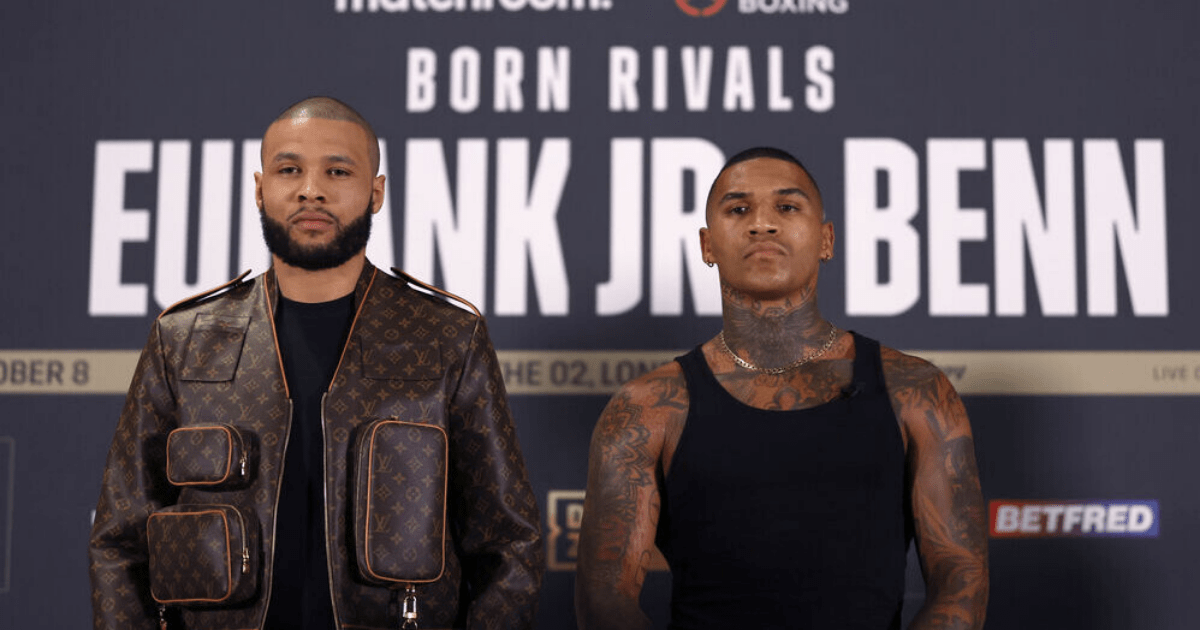 CHRIS EUBANK JR vs Conor Benn has been called off which means both fighters miss out on the estimated £7million purse.

Benn failed a drug test after trace amounts of banned substance clomifene were found in a test conducted by the Voluntary Anti-Doping Association [VADA].

Matchroom remained hopeful the fight would go ahead, claiming a second test conducted by the UK Anti-Doping Agency returned a negative result.

But the British Boxing Board of Control has stepped in and ruled the scrap is ‘prohibited” despite BOTH fighters wanting to continue with the bout.

A BBBoC statement read: “On the evening of 4th October 2022, the Board of the British Boxing Board of Control Limited resolved that the contest between Chris Eubank Jnr. and Conor Benn scheduled to take place on 8th October 2022 is prohibited as it is not in the interests of Boxing.”

Eubank Jr, a middleweight who has also campaigned at 168lbs, was set to drop to his lowest weight ever at 157lbs to challenge Benn – a career welterweight.

Benn boasts a 21-0 record but has struggled to find a significant challenger at welterweight, while Eubank Jr has held multiple championships at middleweight and super-middleweight.

Unsurprisingly the 33-year-old boasts a much higher net worth, mostly thanks to his 32-2 professional record.

Here is how the two Brits match up financially ahead of what was supposed to be a big showdown.

Eubank Jr is reported to have a net worth of £36million.

Eubank has had some big fights in his career and the contest against Benn was set to be his sixth on pay-per-view.

Clashes with fellow Brits George Groves and Liam Williams have given Eubank his biggest purses to date with the fights reportedly pocketing him £775,000 and £1.3m respectively.

In total he has earned around £3.7m from high-profile bouts against the likes of Billy Joe Saunders, James DeGale and Matt Korobov.

Benn, 26, has only risen to prominence in the last couple of years, with a first round knock-out against Samuel Vargas really putting him in the limelight.

According to PopularNetWorth Benn has a net worth of £4.4m and was set to earn £3.5m from his fight with Eubank Jr.

That means he is worth considerably less than Eubank – Saturday’s fight was supposed to be his biggest purse to date with DAZN UK selling PPV packages at £19.99.

Boxing’s most important aspect is punching form. A good punch technique is essential if you are to become a better fighter. These tips will help improve your punching skills.

If you are looking to increase your strength, weight lifting is a must. When lifting weights, there are some guidelines that you should follow. It is important to not do too much. You should lift heavier weights at least once a week. Third, complete each exercise 8 times. Fourth, you should rest for two minutes between sets. Fifth, you can do all the exercises without using momentum. And lastly, put more emphasis on form than speed.

There are many websites that sell boxing equipment. Some of these include Amazon, eBay, Walmart, Target, and Sports Authority. Ross and TJ Maxx, which sell cheap boxing gear are good options.

Always protect your head when being attacked. The goal is to avoid getting punched. To avoid being punched, you must learn how to stop an incoming punch. Here’s how to do it:

Boxing trainers work out for at least 4 hours each day. They also learn new moves and practice punches. Boxers can spar up to 10 times per week.

The mitten is used to punch or hit with the fist. For striking or punching with the index finger’s knuckle, mitt gloves can be used. Boxing gloves that are full-fingered can be used to punch with your whole fist.

Boxing is associated with many health benefits. For one, boxing can help build strong bones and muscles. Boxing improves coordination and reflexes. It also strengthens your heart and lungs. Boxing does not require special equipment. You can use anything you have lying around the house.

Boxing is a popular sport. It is made up of two competitors who aim to knock the head off each other. Boxing rules vary from one country or another. There are generally three types of boxing: Amateur, Professional, and Olympic.

Amateur boxing is often practiced at school, college, or university. This form of boxing involves sparring with no protection and using padded gloves. Amateur boxing competitions typically last for three rounds, each lasting five minutes. There are many styles of amateur boxing such as Kickboxing or Muay Thai, Taekwondo and Karate, Judo and Wrestling, among others.

Boxing is typically practiced in clubs, stadiums or gyms. They are protected by protective equipment like a mouthpiece, nose protector, shinguards, elbow pads and knee pads, waist belt, and groin protection. Professional boxing competitions include six rounds of four minutes each. There are many styles to professional boxing.

There are seven types. Each punch comes with its own technique. Some punches require greater strength than others. A strong uppercut for example requires a lot of force. A straight punch, on the other hand requires less power and is quicker than other punches.

A boxer uses his body to protect himself against attacks. He does this by using his legs, arms, elbows, hands, knees and feet.

A boxer must use his legs to defend against kicks. When he’s hit, he raises his right leg and runs away from the attacker. To avoid being kicked in the side, he bends down if the attacker attacks from the front. He will block the kick with his foot if the attack is coming from behind.

Boxers should respond to being attacked by their opponent by standing back and delivering counter-attacks. This way, he can gain distance between himself and his opponent. A boxer must also maintain his balance when responding to an opponent’s counter-attack.

Boxing is only possible if a boxer has a clear stance. His stance determines how he defends himself. It dictates how he places his body and faces his opponent. Boxers have many stances to choose from. Here are some of the most common ones:

Sparring, a boxing practice session, is designed to improve your boxing skills. During sparring sessions, a boxer trains his mind as well as his body. In conclusion, the purpose of sparring is to learn how to fight and not get hurt.