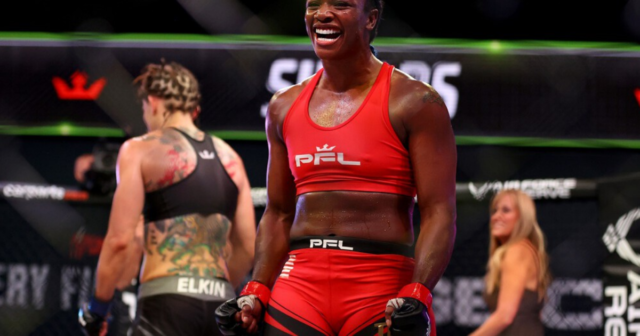 CLARESSA SHIELDS says she could beat up Jake Paul.

And the American boxing star also claimed she would NEVER fight on one of the YouTuber’s undercards.

Shields is eyeing a mega-clash against Savannah Marshall and was asked if she would ever fight on Paul’s undercard ‘like Amanda Serrano’ did for his bout with Tyron Woodley.

But the 26-year-old did not appreciate the question.

She said: “Don’t ever disrespect me.

“I would never fight on the undercard of Jake Paul.

“I’m a three-division world champion and a two-time Olympic gold medallist in boxing.

Claressa Shields wasn't best pleased when asked if she would fight on Jake Paul's undercard: "I can beat up Jake Paul at the weight class I'm at right now."

DON’T GET IT TWISTED! The question was “Would you fight the Undercard of Jake Paul like Amanda Serrano” my answer was “don’t disrespect me, No I would not fight the undercard of him, I listed my accomplishments & let it be known NEVER WILL I EVER AND JAKE PAUL WOULD FALL TO ME

“I would never fight another boxing match for that money because I’m worth so much more. I’m a $1million fighter.

“[Jake Paul] was having a circus show. No disrespect to Tyron Woodley or Jake Paul, but I’m a real boxer.

“I could beat up Jake Paul at the weight class I’m at right now.

“I would never fight on the undercard of someone who does not possess the skills or accomplishments that I have.”

Since turning pro, Paul has won all four of his fights.

There is talk that his next opponent will be Tyson Fury’s younger brother Tommy.

‘FEAR IN HIS EYES’

But the Brit recently said the YouTuber doesn’t fancy it after they clashed at the Woodley event.

Fury said: “He come down the corridor, he was acting the big I am. I was doing an interview with BT.

“So, we squared up, had a little tit for tat, but I’ve seen something in his eyes, and I saw it there and then.

“When we squared up, I looked at him and he doesn’t want any part of me, definitely not.

“Always looking away, looking down. I put it on him and said you need to stop running and take the fight.”

Did you miss our previous article…
https://www.sportingexcitement.com/boxing/anthony-joshua-assures-fans-his-spirit-is-still-strong-after-disastrous-loss-to-usyk-and-says-he-has-learnt-lesson