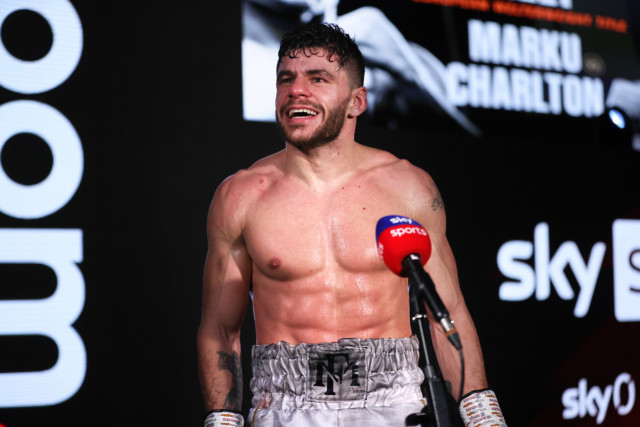 CONOR BENN hit back after Florian Marku said the Brit will ‘never risk his record against me’.

Benn had a ringside seat to watch the Albanian pick himself up from the floor but still dominate Rylan Charlton, winning in the eighth round.

“I start proving myself in Greece back then fighting the best, I beat the best guys in Greece.

“Conor Benn will never risk his record with me. I’m going in there to die and Conor Benn knows that and he will never fight me.”

He is already plotting a path to world title contention and insisted Marku is not yet on his level.

Benn said: “He’s 28 and he’s really got to push on now in his career but the reality is he just got bullied around by a light-welterweight.

“He did get hit with a left hook and he got put down. I beat undefeated kids early on in my career, I’ve been there, seen that, done that.

"I'VE GOT BIGGER FISH TO FRY"

After being called out by @FlorianMarku92, @ConorNigel says he is taking it with a pinch of salt and has bigger fish to fry, is it a fight you'd like to see?#MarkuCharlton pic.twitter.com/5JDCJUV951

“But then again at that stage in my career I was calling people out like me, so you can’t blame him.

“But ‘coward’? Come on, man. Don’t be silly. When he’s calling me out, I said don’t be silly. If that was my left hook you’d be put to sleep.

“You have to take it with a pinch of salt because you think about how many times I’ve been called out throughout my career, tons.

“This guy ain’t going to make no difference. I’ve got bigger fish to fry.

“I beat a former world champion is Sebastian Formella, I’m fighting a guy whose fought the best of our generation (Samuel Vargas).”

Advertisement. Scroll to continue reading.
In this article:conorbenn, fromthefloor, theeighth