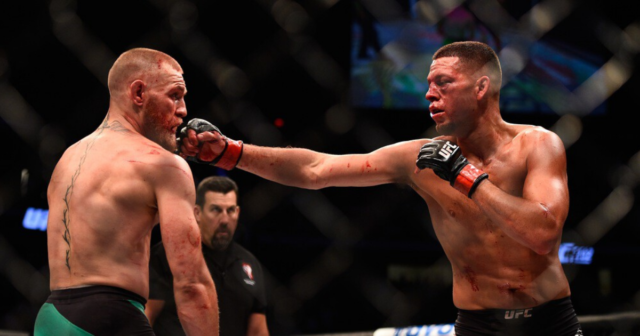 CONOR McGREGOR said Nate Diaz’s boxing skills are ‘p***’ compared to brother Nick’s and goaded ‘I made you’ to his rival.

McGregor was full of praise for Nick, who made his UFC return after six years out but was beaten in round three by Robbie Lawler.

Up until the stoppage, the Stockton veteran had put on a ruthless display of boxing, landing combinations and body shots.

But he also used the opportunity to throw out a dig at old rival Nate, fuelling speculation of a trilogy bout between them.

McGregor, 33, tweeted: “Nate your boxing is p*** compare to nicks. We been fed garbage with your sloppy shots the last few years.

“Can see the clear difference between the two brothers after last night. Balance, composure. Another level the big bro is on to you. I made you.”

Nate, 36, became the first man to ever beat McGregor when he filled in on under two week’s notice at UFC 196.

But the result was avenged five months later in a five-round classic at UFC 202, leaving a trilogy decider evading fans ever since.

Nate most recently lost to British welterweight Leon Edwards, 30, but wants to return in December.

McGregor meanwhile is nursing a broken tibia suffered against Dustin Poirier, 32, in July.

Poirier, who was first beaten by the Irishman in 2014, knocked him out in the rematch in January and won the trilogy by doctor stoppage.

McGregor is hoping to make a comeback next year having undergone surgery on the injury.

Did you miss our previous article…
https://www.sportingexcitement.com/boxing/oleksandr-usyk-planning-to-spend-time-with-wife-and-kids-after-smashing-anthony-joshua-as-he-arrives-back-to-ukraine