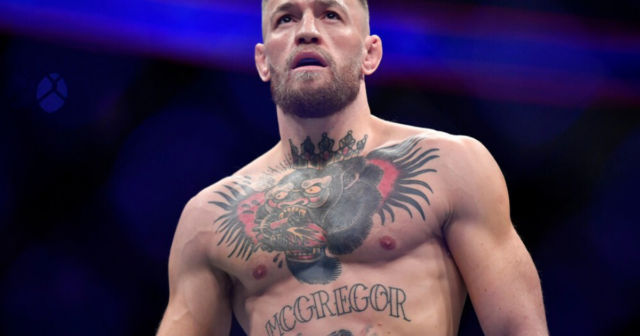 CONOR MCGREGOR has blasted ‘Versace t***’ Tyson Fury for not helping Billy Joe Saunders’ dad after he was shoved by security following his son’s loss to Canelo Alvarez.

The Brit’s fight against the Mexican icon was waved off last summer due to ‘Superb’ suffering a broken eye socket.

The star’s worried father Tom decided he needed to check on his son, and leapt over the barrier.

But Tom, wearing a blue cap, was shoved forcibly backwards by a security guard, before others joined in to help Saunders Sr.

However, WBC heavyweight champion Fury decided to stay out of the brawl – something which his next opponent Dillian Whyte has already called him a ‘coward’ for.

Wearing a Versace shirt, the 6ft 9in 19st-plus Gypsy King stayed behind the ringside barrier and appeared to be begging for calm.

Now UFC legend McGregor has joined in and says Fury ‘bottled it’ during the melee.

The Irishman appeared to be irked by a tweet from Fury that praised McGregor’s longtime rival Khabib Nurmagomedov.

And in a reply to that, McGregor mocked Fury for not defending Saunders’ dad.

He wrote: “Yup the Joyces. Big Joe! U bottled it with Billy joe Da, what were you doing there ? ULeft him, Versace t*** U.Done. Nothing.

“Ya’s did it right ye right hahahahaaj. Even when I’m wrong i’m right. Who did it right ? The Mac daddy tonight, in house. Miami d12! Bahamas.”

Saunders was contemplating hanging up his gloves after the crushing damage in his defeat to Canelo but recently admitted he misses boxing.

Fury, a longtime friend of Saunders, had previously told him not to retire and claimed that it would ‘haunt him forever’ if he quit.

Advertisement. Scroll to continue reading.
In this article:billyjoe, conormcgregor, hewas