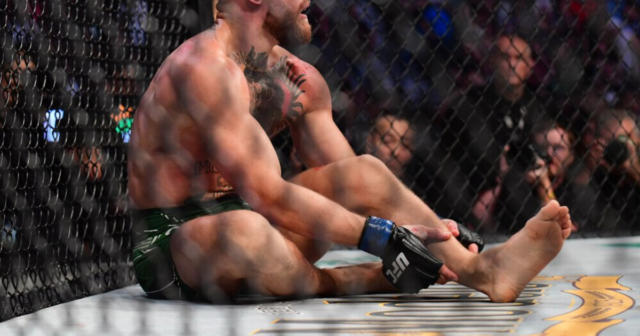 The Irishman suffered a broken tibia against Dustin Poirier at UFC 264 and was unable to fight on as the doctor waved it off before round two.

McGregor has undergone surgery and will be on crutches for six weeks on his road to recovery.

Despite the setback, the former two-weight UFC champion was already joking about making his return in a charity boxing bout – in a wheelchair.

He was lined up to face impressionist Al Foran, who gained fame for mimicking the likes of McGregor.

In the main-event, former Olympic champion Paddy Barnes, who retired in 2019, will fight in a wheelchair boxing match.

And following McGregor’s injury, he wanted to follow suit with a wheelchair bout of his own.

His coach John Kavanagh told the UFC’s Laura Sanko: “Conor had volunteered to be the co-main event where he was gonna box, there’s a guy called Al Foran who is an impressionist.

“You might have seen him do some of Conor’s impressions. So Conor’s gonna fight Conor in the co-main event.”

“So Conor was going to fight Conor in the co-main event, which I thought was quite funny, he was accepting his first ever co-main slot.

“He’s been main-event for a couple years now. But anyway in the heat of all this he just turned and went, ‘You know, I’m gonna do the wheelchair boxing fight now’.

“Because, he’s off his feet for a while. He made a joke about that.”

McGregor, who beat Poirier in 2014 but lost the rematch in January, called for a fourth bout with his rival after the unprecedented finish to their trilogy.

It put any talks of retirement to bed, with Kavanagh insisting the Irish superstar is only now entering the peak of his powers ahead of his 33rd birthday this week.

“Because we really just got this fantastic rhythm.

“He’s turning 33, which to me is a peaking time where strength meets conditioning and mental and physical and spiritual maturity, everything’s coming together.

“I think we have a couple of years of this ahead of us.”

Advertisement. Scroll to continue reading.
In this article:conormcgregor, dustinpoirier, theirishman