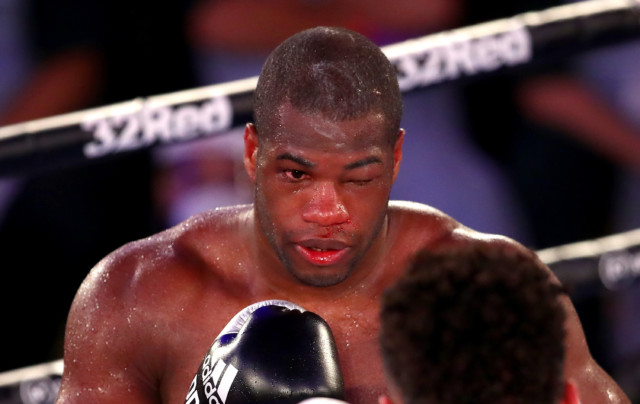 DANIEL DUBOIS has been given the all-clear to return to boxing and is set to make his in-ring comeback in May.

Dynamite has been out of action since suffering a first professional defeat against Joe Joyce in November.

The 23-year-old lost his British title when The Juggernaut’s brilliant jab forced him to take a knee and be counted out in the tenth round.

Dubois’ harshest critics accused him of being a quitter who ducked out as soon as the going got tough against the 35-year-old Olympic silver winner.

And promoter Eddie Hearn even doubted early reports of the severity of the damage, a move Dubois’ matchmaker Frank Warren called ‘c***ish’.

That is despite the heavyweight suffering a cracked eye socket and bleed on retina while he was leading on the scorecards.

Dubois has since reacted by installing Mark Tibbs as his new trainer with with Martin Bowers and brother Tony retaining managerial duties.

And Warren has revealed the British star is meeting the three this week to pencil in his return to the ring.

Speaking on the Lowdown, he said: “His manager is Martin Bowers and his brother Tony advises him and I understand they’re having a meeting with Mark Tibbs this week and then see what happens and see where it goes.

“I’ve spoke with him a couple of times and he got the all clear last week so now he can resume training and he’ll be out some time in May.”

Dubois himself explained earlier this month why he ditched Peacock Gym boss Bowers as his trainer in favour of moving into Tibbs’ stable.

He said: “I really need a fresh start and I need to do what is best for me really.

“Martin and Tony did a tremendous job, it was a great few years and I am very grateful, we had a fantastic journey.”

Did you miss our previous article…
https://www.sportingexcitement.com/boxing/canelo-vs-yildirim-uk-start-time-confirmed-dazn-live-stream-tv-channel-undercard-info