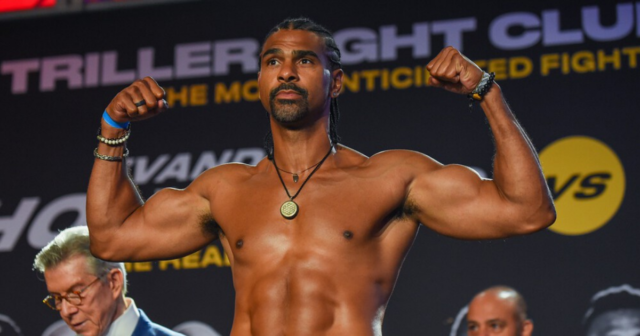 DAVID HAYE has once again declared he would only come out of retirement to face Tyson Fury as the pair have ‘unfinished business’.

The 41-year-old’s last professional fight came in May 2018 where he was stopped by Tony Bellew in their rematch.

But the two-weight world champion made a victorious return on his comeback in September in his exhibition contest against friend Joe Fournier.

Haye subsequently called out the Gypsy King for a dust-up, who he was scheduled to fight in 2012 and 2013 only for the Londoner to pull out through injury.

Fury’s dad John then called out Haye himself, but the Millwall fan has insisted he only has eyes for Tyson as he spoke of the four attributes needed to beat him.

Speaking iFL TV about John Fury’s offer, Haye said: “No as I said I am retired, the only person I would come back for is the No1.

“If all of a sudden Tyson Fury suddenly came out and said I want to fight David Haye and we have some unfinished business from 2013.

“Yeah I would definitely consider it for sure, but it gets to a point where it is now about the money.

“Fury has earned good money from big fights with [Deontay] Wilder and everyone still wants the fight with [Anthony] Joshua even though he has lost.

“I like John Fury but maybe he is trying to get in the way, I saw an interview where he was very vocal about me not fighting Tyson.

“Maybe he sees something in me that he doesn’t want in the ring with his son. Maybe that’s why he is trying to distract me from fighting his son.

“The only attributes that are required, I believe, to beat Tyson Fury is quick feet, overhand right, in and out of range and someone who can see the shots as quick as he can.

“The version of me fighting Tony Bellew wasn’t that guy by any stretch, but if there was a way to fatten myself up, maybe this new diet of mine.”

He then joked: “I can feel some of the Fury magic around my stomach at the moment from eating all those pizzas, so maybe I’ll go to the gym and maybe I’ll start feeling a bit Fury-like.”

WBC heavyweight champion Fury has also been called out by Joe Joyce after Dillian Whyte failed to be named as his mandatory opponent.

Posting a picture of the duo posing together, he wrote on Instagram: “I have got lots of respect for Tyson Fury as a friend and as a fighter, but my schedule is free in February.”

His promoter Frank Warren told Sky Sports of the potential bout: “I was talking to Tyson about him. Tyson said that he’s the best one out there.

Did you miss our previous article…
https://www.sportingexcitement.com/boxing/oscar-de-la-hoyas-stunning-girlfriend-holly-sonders-gets-huge-tattoo-of-boxing-icon-just-three-months-into-romance