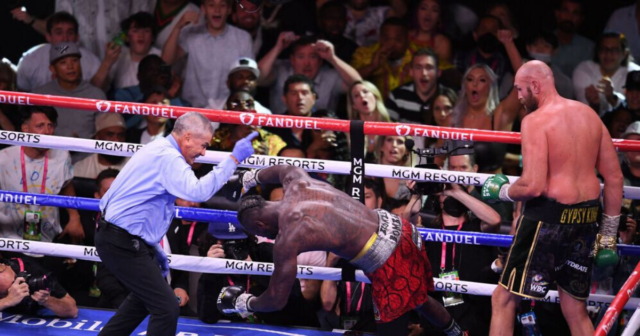 DEONTAY WILDER has been handed a six-month suspension after his brutal battering at the hands of Tyson Fury.

The American slugger was demolished by the Brit and finally KOd in the eleventh-round over the weekend.

It came after a fight of the century candidate between the pair with FIVE knockdowns at the T-Mobile Arena in Las Vegas.

But Wilder has now been banned from getting back into the ring until April next year at the earliest.

The 41-2-1 heavyweight was dropped three times during the savage battle in front of a packed-out crowd.

He was taken to hospital straight after the bout for scans on his head and hands.

SunSport exclusively revealed last night how suffered a broken hand in the fight and will have surgery next week.

He also broke his finger and knuckle while punching Fury, along with facial damage.

And the Nevada State Athletic Commission will now not allow him to fight again until April 8.

He will have to be medically cleared by a doctor as well to get back into the ring again.

It is understood Fury has been given a 45-day suspension following the classic heavyweight contest.

It finally put an end to an epic trilogy of fights over three years, with none of them disappointing fans.

Meanwhile, Fury arrived back in the UK yesterday at Heathrow after a flight home with family and friends.

The Gypsy King spent a few days after relaxing and partying in Vegas to celebrate his enthralling victory.