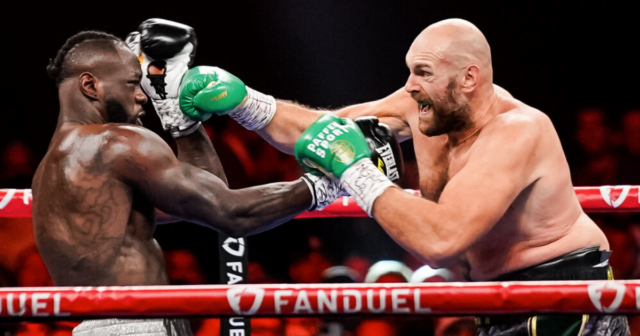 DEONTAY WILDER refuses to ever have a friendship with Tyson Fury.

The pair have shared a magnificent trilogy – the sort that usually forms a bizarre and beautiful boxing friendship.

But the 36-year-old Alabama power-puncher – who accused Fury of all manner of cheating to secure a draw and two iconic wins over him – says there is no chance of a bromance.

Speaking on the latest episode of the Kasich & Klepper Podcast, he said: “No, I don’t have a friendship with him. At all.

“Sometimes, as you’re growing up in the boxing world, you don’t really have too many friends that you compete against.

“A lot of guys don’t, a lot of guys think that the closer you get to a fighter, the less you’ll perform when you have to fight him, because you have got to understand there’s still competition.”

Despite all the trademark trash talk, Fury always fancied staying on good terms with the Bronze Bomber.

Even after battering him in their third and final barnstormer, he marched across the ring and tried to celebrate their bravery together – only to be snubbed.

The 33-year-old Gypsy King claims to be retired after the three legendary bouts.

But Wilder – who has just started training again – has explained the pain of walking away too soon.

He said: “With fighters, you know when you know. Because our mentality always feels like we have another round in us.

“When you love doing something you never want to stop, especially when you’re at a top level and you’re making millions of dollars.

“But only a smart man knows when they’re able to stop, only a man that has invested his money, has done the right things in his career, can really know and say, ‘I can give it up and don’t have to come back no more’.

“Most of the time guys 97 -98 per cent of fighters don’t have anything to show for their careers after they’ve retired. They only have things to show for while they’re in it.”

SunSport expects Wilder to face the winner of stablemates Andy Ruiz Jr vs Luis Ortiz who collide on September 4.

And then the 6ft 7in KO artist will then to try to muscle back in on the world title scene.

And he explains how the hurt business works, with great experience.

He said: “If you have the right mindset, if you have done the right things and had a plan, it’s easy to retire.

“This is a young man’s sport so you have to plan ahead. I’m a guy that plans ahead.

“I tell my children that they’re blessed because not only do I think about their current situation and plan for them now, I plan for their future as well.”