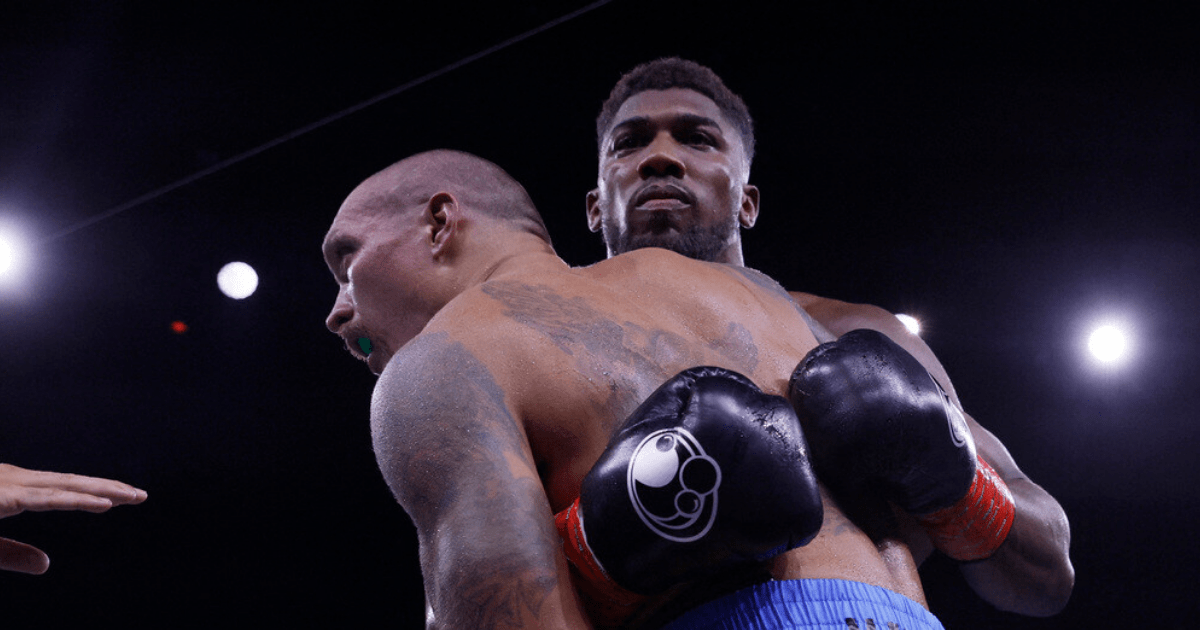 DEONTAY WILDER accused Anthony Joshua of being “fearful of running out of gas” in his rematch loss to Oleksandr Usyk.

AJ was beaten on points by Usyk for the second time in the space of 11 months in August in Saudi Arabia.

Anthony Joshua was accused of being ;fearful of running out of gas’ in his rematch with Oleksandr Usyk

And Wilder pointed to Joshua’s gas tank as a major fault in his style.

He told Sky Sports: “I just think Joshua was very cautious in what he did as far as exchanging punches.

“I always forever said it, as I see it he has a big stamina problem. I think if he can correct that, I think you will see a different Joshua.

“You won’t see one that’s so hesitant to throw punches and do things especially when he had Usyk, was close to getting him out of there.

“I think he was just a little fearful of running out of gas too quick and too fast and he held back a little bit.”

Usyk, 35, set himself up for a historic four-belt unification bout with Tyson Fury, 35, the first in heavyweight history.

But he ruled himself out until next year to rest and recover with loved ones having returned to his war-torn home of Ukraine.

Fury instead turned his attention to beaten-and-bruised Joshua, 32, as talks continue over a December 3 Battle of Britain bout in Cardiff.

Usyk reacted by calling out Wilder, 36, who returns on October 15 against former sparring partner Robert Helenius, 38.

He said: “I heard about the Usyk situation and he’s going to be there. I hold Usyk to be a man of his word.

“If Usyk’s saying he wants to give me an opportunity for the titles then that’s what I’m holding his word to.

“I always tell people that I don’t look past fighters but I do look through them, there’s nothing wrong with that, being confident in yourself and looking ahead once this chapter is closed.

“I’ve got to handle business at the end of the day. Without handling business then nothing else is moving forward.

“Once I’ve accomplished and finished what I have to do with Robert then I’ll move on and I’ll be looking forward to the next challenge, whether it’s Usyk or whether it’s anybody else.”

Boxing takes approximately 3 months to learn. This includes learning the basics, such as footwork, stance, and balance. It is important to remember that boxing does not just involve throwing punches. It is important to know how to dodge and block attacks.

Always protect your head when being attacked. The goal is to avoid getting punched. To do so, you need to know how to block an incoming punch. Here’s the way to do it.

You can also watch professional boxing matches live on TV if you don’t have a partner and want to learn boxing. Or you can find an amateur boxing club near you. Amateur boxing clubs often hold regular training sessions. These sessions are often attended by sparring partners who share the same pads.

It’s a great way for you to feel fit and healthy. You will find that the activity is enjoyable and you want to continue doing it.

There are many kinds of boxing programs. You can choose to train in a gym or at home. Others require that you go to a health club. There are also online courses which allow you to study from anywhere in the world.

Make sure you choose a program that meets your needs and is compatible with your lifestyle. The best programs will include exercises that help build muscle mass and flexibility, improve cardiovascular endurance, enhance well-being, as well as increase overall wellbeing.

Advanced programs usually last for six months and are around $300. They may include nutritional advice, stretching, warm-up exercises and instruction on proper technique. Some programs include resistance training, such as lifting weights, and aerobic conditioning, such as running.

Advertisement. Scroll to continue reading.
In this article:anthonyjoshua, running, wildersays