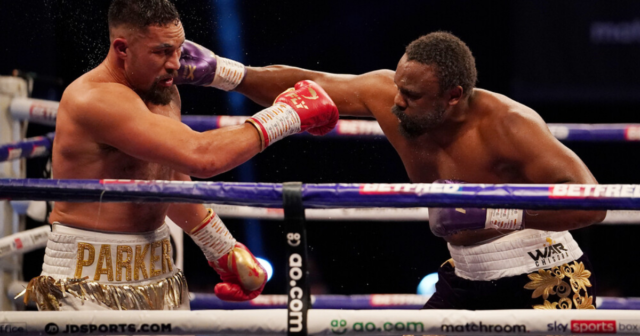 DEREK CHISORA will look to breathe new life into his boxing career next month as he takes on Joseph Parker in a heavyweight rematch.

The Brit star controversially lost his first fight with Parker back in May, despite scoring a knockdown in a particularly close contest.

Chisora demanded an immediate rematch and Parker was happy to oblige, so the pair will do battle once again, but this time in front of fans.

Their fight will headline a stacked night of action which includes Lerrone Richards’ clash with Carlos Gongora.

When is Derek Chisora vs Joseph Parker 2?

“I’m half excited and half not. I’m happy for the fight but might be disappointed what comes with the fight,” Chisora said.

“I’m going to speak to my management company. We need an American referee and get good judges for this fight because so many times I’ve been robbed.

“It’s one of those things but it gets a bit frustrating. Joseph Parker does not scare me. He doesn’t have anything I’m scared of. He hasn’t got power punches, I don’t even know how they gave him the last fight.”

Parker added: “I’ve watched the fight back and I thought I won, he thought he won, that’s why we’re doing it again,” said Parker, whose two defeats from 31 fights have come against Britons Joshua and Dillian Whyte.

“Derek is a tough guy – he comes forward, puts you under pressure, bites down on his gumshield and throws the kitchen sink at it.

“It’s my goal to be a two-time world heavyweight champion and I’m well placed in the rankings so you have to take the opportunities when they come.”

Did you miss our previous article…
https://www.sportingexcitement.com/boxing/canelo-alvarez-could-move-up-to-tyson-fury-and-anthony-joshuas-heavyweight-division-claims-eddie-hearn