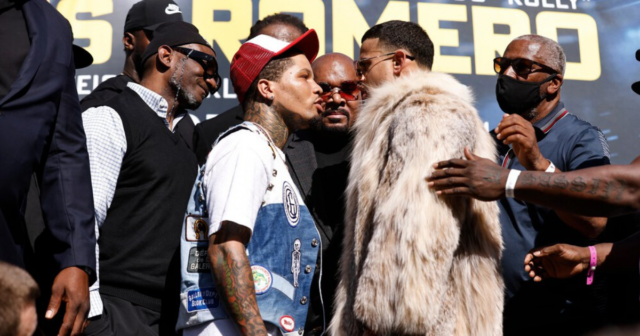 Romero faces being pulled out of his Showtime pay-per-view fight with Davis after a police report was filed against him.

A new opponent is being looked into and according to ESPN, Mexican Isaac Cruz is the frontrunner if a substitute is needed.

But promoter Hearn revealed WBC lightweight champion Haney – still in talks to fight JoJo Diaz – is also prepared to fill in for Romero.

He said: “I spoke to Devin Haney earlier, and I said, ‘Are you happy for me to put your name in the mix?’

“And he said yeah, because at the moment ‘No-go Diaz’ has not signed his contract after being offered more to fight Devin Haney than he was getting to fight Ryan Garcia.

“So we’ll have to see what happens, but we want to make the JoJo Diaz fight. But he’s got to hurry up and sign the contract.”

Diaz, 28, was due to fight Garcia, 23, but the unbeaten American pulled out injured.

He has since verbally agreed to instead face Haney, 22, but has not officially signed his side of the deal.

Davis, 26, was meanwhile set to fight Romero, also 26, on December 5 in Los Angeles.

But several women have come forward and accused Romero of sexual assault.

A spokesperson for the Henderson (Nevada) Police Department confirmed to ESPN that they received a report on Friday involving the boxer.

The spokesperson said there is an open investigation connected to the alleged incident.

“At this point we’re still monitoring the situation, looking to find out all the facts.

“And until we feel like we have a firm grasp we’re not gonna comment further, but it is something we’re looking into very seriously.”

Did you miss our previous article…
https://www.sportingexcitement.com/boxing/oleksandr-usyk-leaps-to-defence-of-anthony-joshua-and-says-brit-turned-in-brilliant-display-in-tottenham-tussle