Dillian Whyte net worth: How much money does the Body Snatcher have and what is his purse for Tyson Fury?
Advertisement 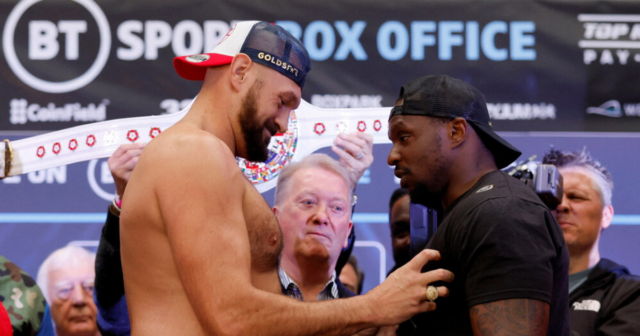 DILLIAN WHYTE has had an impressive career as a boxer since turning professional back in 2011.

The Body Snatcher has been in some big money-making fights and has racked up huge wins along the way.

And tonight, he looks to bag another as he faces Tyson Fury in a massive WBC world heavyweight title fight at Wembley Stadium.

What is Dillian Whyte’s net worth?

Whyte has been in some massive fights in his career, including one which he lost against heavyweight superstar Anthony Joshua back in 2015.

Across his career, Whyte has made millions in earnings.

And according to Celebrity Net Worth, his net worth stands at £7million.

Following his loss to AJ, Whyte notched over 10 wins in a row and turned himself into a pay-per-view attraction in the UK.

His entertaining fighting style has afforded him the luxury of commanding big purses, such as the £4million pay-day he made to fight Povetkin in August 2020.

Whyte, however, could have made even more money had fans been present at the clash.

They weren’t allowed due to the coronavirus pandemic.

What is Dillian Whyte’s purse for the Tyson Fury fight?

Whyte will earn £5.5m for the fight, which is a career-high pay day for the Brixton man.

Whyte’s purse will be be bumped up to £8.6m if he wins the fight, but there is no pay-per-view incentive for the Body Snatcher.

The 33-year-old has yet to feature in any of the pre-fight build up and didn’t show up at the press conference for the fight last month.

Whyte, however, is expected to go through with the fight and has signed the contract to do so.