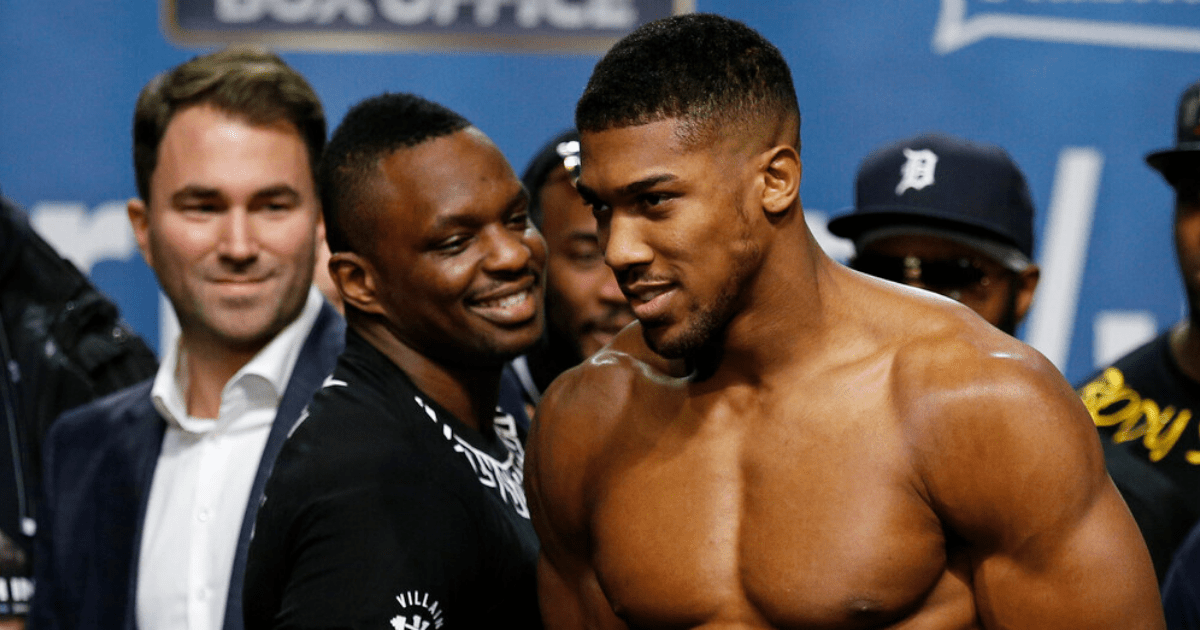 DILLIAN WHYTE is ready to “step up” and rematch Anthony Joshua in December as a super-fight with Tyson Fury hangs in the balance.

Joshua is yet to return a contract sent by Fury’s team for a title tilt at the Principality Stadium in Cardiff.

But the WBC champion has grown increasingly frustrated and wanted the deal signed yesterday as he turned his attention elsewhere.

So with AJ still training for a return by the end of the year, Whyte – who lost to Fury in April – has offered himself as an alternate option.

He told Sky Sports: “If the Fury fight doesn’t get made with him and Joshua, me and Joshua can fight in December if he wants.

“He’s training for it, he’s ready for it, he’s willing to take Fury on so if that fight doesn’t get made I’ll step up and take the fight with Joshua.”

Fury, 34, claimed Joshua, 32, was officially out of the running as he instead turned called out Manuel Charr, 37.

He said: “Manuel Charr, so it seems now that AJ’s finally out, he’s ducked his way out, s***bag, coward.

“And you’re the man that wants to fight and I like that. I like the fact that you’re very vocal and you’re calling for a fight like a real man should do.

“Any man that wants to fight another man should call him out, like as you’ve been doing to me.

“So, I accept your challenge Manuel Charr, let’s get it on motherf***er.”

But opposing promoter Eddie Hearn insisted there are still details to be ironed out with meetings and negotiations actively taking place.

That is between both Matchroom and Queensberry promotions, as well as broadcasters BT Sport, DAZN and ESPN.

Although Hall of Fame promoter Frank Warren also voiced his frustration at a deal not yet being struck.

He said on talkSPORT: “We’ve done all that’s necessary with BT, ESPN and DAZN. They’re all happy.

“We gave them a contract. They’ve had it for two weeks and it hasn’t come back yet.

“Ticketing and the venue is ready to go. We’ve agreed transparency with them.

“Everything in the pot. Everything they needed – co-promotion, the lot – we’ve bent over backwards. We’ve not had anything back.

“I had a bet with Tyson that we’d get it done in the next few days. He said, ‘No, Joshua doesn’t want the fight’. I’ve lost the bet.

“Joshua said he wanted the fight – so let’s get it done. I don’t understand this.”

Tyson Fury has turned his attention to Manuel Charr

A left hook is thrown facing the opponent with the back hand. The elbow is bent 90 degrees and the wrist is turned 45 degrees toward the opponent.

A right cross is thrown with the palm facing the opponent’s face and the elbow straight. The opponent’s wrist is rotated 45 degrees to the side.

Boxing is one among the oldest martial arts known. China recorded the first boxing match in 2200 BC. Boxing has existed for thousands upon thousands of generations. Today, boxing is still popular among athletes and celebrities. It takes approximately 10 months to master boxing.

The reason why it takes so long to learn boxing is because it involves many different types of movements. Each movement requires specific muscles in order to be effective. So, it takes time to develop these muscles.

But once you’ve learned how to move your body, you can start practicing any type of boxing technique. And over time, you’ll become more skilled at each technique.

Boxing is the most loved sport in the world. It consists of two opponents who try to knock out each other’s head. Each country has its own rules. There are three types: Amateur, Professional, or Olympic boxing.

Boxing is often practiced in gyms or clubs. They are equipped with protective equipment including a mouthpiece and nose guard, shinguards as well as elbow pads, knee pads. Waist belts and groin protectors. Six rounds of professional boxing last four minutes each. There are many styles to professional boxing.

Olympic boxing can be seen at the Olympics. Special protective gear must be worn by boxers to ensure compliance with international standards. The competition lasts approximately three minutes for each round. There are only two styles of Olympic boxing; Light Flyweight and Heavyweight.

There are seven types: Left Hook (right hook), Right Hook (uppercut), Cross (cross), Straight, Overhand, Underhand. Each punch comes with its own technique. Some punches need more power than others. For example, an uppercut requires great force. A straight punch, on the other hand requires less power and is quicker than other punches.

There are many combinations of punches. These are combinations that combine punches to accomplish a particular goal. One combination can have many parts. For example, a left hook followed by a right cross will cause damage to the opponent’s jaw.

Boxers use both their hands and arms to prevent incoming blows. To do this, they raise their fists higher than their heads and move their arms in the direction that the attack is coming. Then they make contact with the attacker’s fist.

If he is being attacked, a boxer must take a step back and counter-attack. This will allow him to gain distance from his opponent. A boxer must also maintain his balance when responding to an opponent’s counter-attack.

In order to box effectively, a boxer needs to establish a stance. How he defends his self will depend on how he stances. It dictates how he places his body and faces his opponent. There are many positions that boxers can adopt. Here are the most commonly used ones:

The timing of each punch determines the effectiveness of a combination. A combination that works well starts with strong punches and ends with weak ones is a winning combination.

Sparring is an exercise session to improve boxing skills. A sparring session is where a boxer trains both his mind and his body. Sparring is a way to learn how to fight without getting hurt.