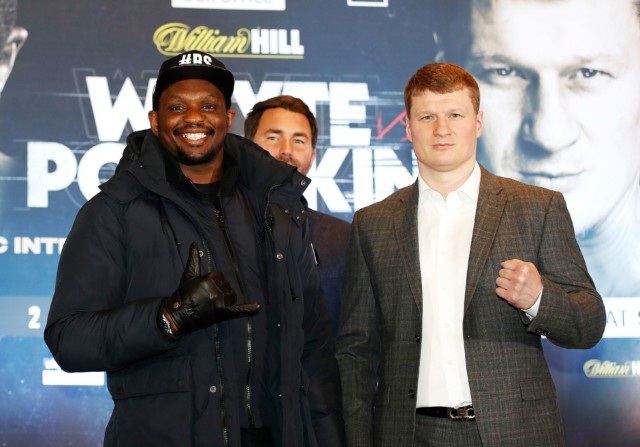 DILLIAN WHYTE has the WBC Diamond belt on his mind ahead of his bout against Alexander Povetkin on Saturday.

The prestigious strap is on offer at Matchroom’s Fight Camp with the winner of the clash to face Tyson Fury or Deontay Wilder next up.

And WBC president Mauricio Sulaiman has taken to Twitter where he has posted a video of the belt Whyte and Povetkin are competing for.

The faces of both boxers are showcased on the belt, with the United Kingdom flag next to Whyte, 32, and the Russian flag next to Povetkin, 40.

Whyte is looking to win his 12th consecutive fight since losing against Anthony Joshua in 2015.

Povetkin’s last defeat also came at the hands of Joshua, who stopped him in the seventh round of their world title clash in September 2018.

And ahead of the fight, promoter Eddie Hearn has ripped into Povetkin’s ‘rascal clobber’ after his team touched down in England.

Such is the fear that the two men could fight before the weekend, Whyte could end up staying in a Winnebago this week.

Hearn revealed: “We are looking at the possibility of hiring a Winnebago and parking it in the private area that we have in the hotel car park because I don’t think it’s safe for Whyte to be around Povetkin in fight week.”

“If we don’t separate these guys they will be rolling down the hill towards the A12.

“It is a serious, serious point I’m making to the British Boxing Board of Control. We need to make sure those two are separated and segregated. 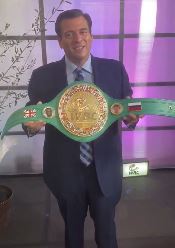 “We are looking at contingency plans which includes the Winnebago, and we are seeing if everyone is happy in terms of quarantining.”

Advertisement. Scroll to continue reading.
In this article:alexanderpovetkin, dillianwhyte, onsaturday