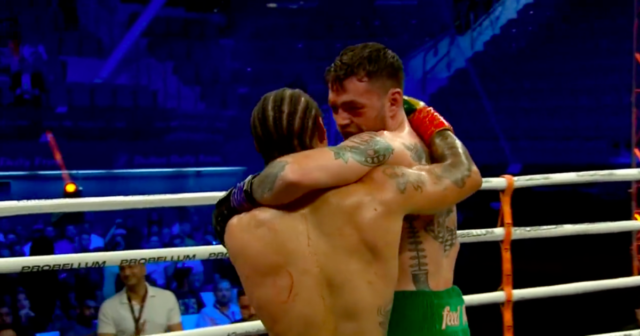 REGIS PROGRAIS proved he was a cut above Tyrone McKenna – by leaving the Irishman with a gruesome gash.

The American former light-welterweight world champion insisted throughout the build up he was not one but several levels above.

And he proved good to his word by dominating McKenna, scoring a knockdown and leaving the referee with no choice but to stop it.

Prograis floored McKenna in round two with a perfect left hook over the top and it was one-way traffic soon after.

McKenna fought back in spurts – much to the excitement of the travelling and ex-pat Irish fans.

But nothing put a dent in dominant Prograis, who landed some spiteful left hands to run away with the fight.

Eventually, the ref called off the contest before the start of round seven.

It puts Prograis, 33 in line to challenge for the WBC belt still held by Josh Taylor, 31.

But the Scot looks set to vacate it – along with the WBA, WBO and IBF versions – to move up to welterweight.

It comes after his controversial points win over Jack Catterall, 28, in Glasgow last month.

Catterall has since signed with Probellum after his heartbreak – setting up a potential fight with Prograis.

Prograis said: “Now we’ve got Jack Catterall out here, he called me out last night. Jack’s right there! It looks like he wants to fight me.”

Advertisement. Scroll to continue reading.
In this article:hewas, thebuild, wasnot