VITALI KLITSCHKO warned Anthony Joshua not to ‘show weakness’ and step aside for Oleksandr Usyk to fight Tyson Fury.

Joshua is owed an immediate rematch following defeat to Usyk in September, which Klitschko watched from ringside in London.

But Middle Eastern backers were fronting talks and mega money for the Ukrainian to instead fight Fury for all the belts.

It would mean Joshua and Fury’s WBC mandatory challenger Whyte receiving a fee to sit on the sidelines and allow the historic unification.

But 50-year-old Klitschko – who cornered brother Wladimir in defeats to AJ and the Gypsy King – advised Joshua against any step-aside deal.

He told Sky News: “It is his decision. “But my personal opinion?

“If Joshua sidesteps in this moment, when the boxing audience expects a rematch and wants to see Joshua versus Usyk, it would show weakness.

“Joshua, don’t do that please. As fighters, we fight not just for ourselves but for the audience.

“The audience decides. If the audience wants the fight, it must happen.

“If Joshua sidesteps, I am not sure that the interest in Joshua would be so big in the future.”

Despite Klitschko’s plea, promoter Eddie Hearn admitted they were willing to listen to step-aside offers.

They would have needed a guarantee of fighting the winner between Usyk and Fury along with the expected multimillion pound fee.

But in a twist, according to ESPN, there was step-aside ‘agreement in principle’ with AJ and Whyte, until ‘parties attempted to renegotiate at the 11th hour’.

It was claimed £115million was put up for Fury, 33, to fight Usyk, 35, in Saudi Arabia in a historic, first-ever four-belt heavyweight unification.

Funds from that package would have gone to Joshua, 32, whose figure had been reported as £15m, and Whyte, 33, believed to have been in line for £5m.

The two British heavyweights were said to be on board with accepting a fee to step aside.

It means Fury is now set to face Whyte with purse bids for the title defence due to take place on Friday evening.

Meanwhile, Joshua is all-but confirmed for a rematch with Usyk, having been dethroned of the WBA, IBF and WBO belts. 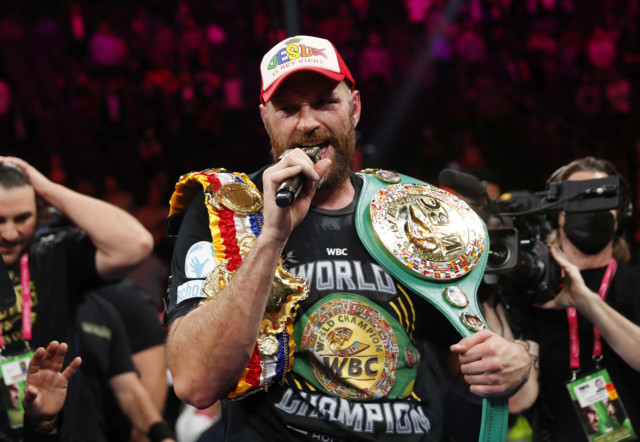