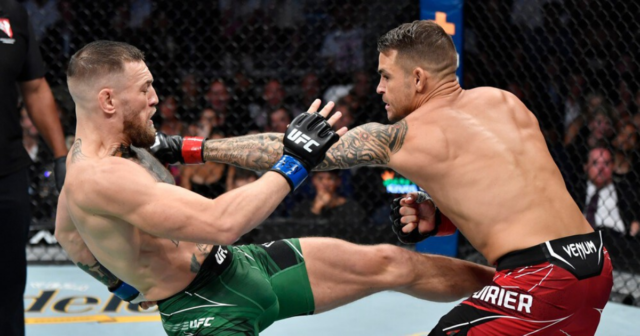 DUSTIN POIRIER has revealed he’s open to having a fourth fight with Conor McGregor – inside the boxing ring.

Poirier, 32, has shared the octagon three times with the UFC’s poster boy and is currently 2-1 up in their series. 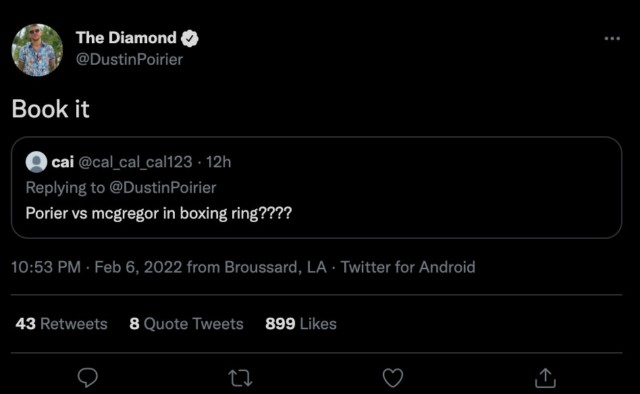 The former interim lightweight champion has flirted with the prospect of a fourth fight with The Notorious and admits he’d also be willing to face his rival inside the squared circle.

When asked about the prospect of boxing McGregor during an impromptu Twitter Q&A, Poirier replied: “Book it.”

MMA fans were quick to comment on Poirier’s willingness to box the former two-division champion, with one saying: “I’d rather see the 4th fight than a boxing bout.”

Another said: “Nah bro, we need a quadrilogy in the cage!”

And another said: “That would actually be a really good fight to see.”

One remarked: “Dustin has Conor’s number, east money for Dustin.”

Former featherweight rivals Poirier and McGregor locked horns with one another twice in 2021, with the former coming out victorious on both occasions.

The Diamond knocked out McGregor in the second round of their Abu Dhabi rematch last January before registering a first-round TKO victory in their Las Vegas trilogy fight six months later.

McGregor, 33, suffered a horrific broken leg in their Sin City series decider, which he’s still on the sidelines recovering from.

The Irishman has been hard at work in the gym and in rehab over the last few months and is eyeing an April return to sparring.

And UFC supremo Dana White reckons Mystic Mac could be set to make a summer return to the cage.

When asked about McGregor competing this year, White told TMZ: “I think so, yeah.

“He’s doing all the right things with his leg. I’m hoping he can come back this summer.”

When pressed about Nate Diaz potentially welcoming McGregor back to action, he told ESPN:: “It could be [next]. 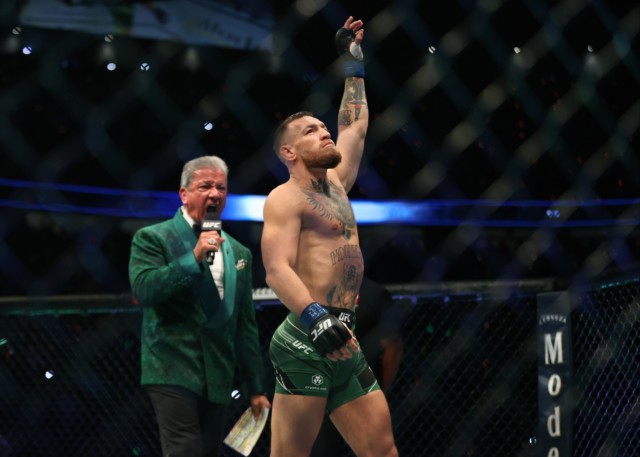 Conor McGregor is eyeing a summer return to the octagon

“I think Conor will be back in summer. But I don’t know for sure. It depends on how his leg heals.

“There are a million things that could happen between now and then. To even speculate is stupid. I’ve stopped doing that.

“When McGregor contacts me and tells me he’s ready to start training 100 per cent, then we’ll start talking about what’s possible for Conor.”