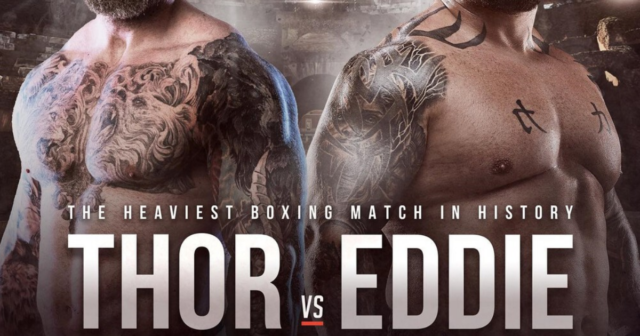 HAFTHOR BJORNSSON and Eddie Hall are finally set to lock horns on March 19.

It has been confirmed that Bjornsson and Hall are going to meet in a boxing ring next month at the Dubai Duty Free Tennis Stadium.

The two strongmen were initially scheduled to lock horns in September following a brutal war of words dating back five years.

However, British heavyweight Hall suffered a detached bicep and thus the fight had to be postponed.

But now the stage is set for the heaviest fight in boxing history when the two rivals meet in the United Arab Emirates.

Hall weighs a whopping 157kg whereas Thor – who became famous when he performed as Gregor ‘The Mountain’ Clegane on Game of Thrones – is at 145kg.

The Icelandic superstar recently underwent an incredible body transformation as he previously weighed a hulking 205kg.

But Hall still likes his chances as he insists the 33-year-old will hit the canvas when they unleash hell against each other.

The Beast said: “Not only will this be the heaviest boxing match in history, but it features two immense competitors who have been training intensely to reach peak mental and physical fitness.

“Winning is everything in this once-in-a-lifetime clash. But I know one thing – I want it more and will leave Thor lying on the floor.

“I love it that my fight is the number one most anticipated battle of 2022. It stirs me up – gives me even more drive, if ever that was needed.

“When that bell goes, I won’t be letting anyone down. I’ll be in a zone – THE ZONE – like no one has ever seen me in before.”

Bjornsson respects Hall as an athlete but insists he will knock him out when they collide.

The actor previously said: “Eddie Hall, you better be training your a** off.

“Because I’m coming for you, and I’m knocking you out – you’re going down.

“I respect you as an athlete, and I know you’re training hard, but I am going to knock you out, see you soon!”