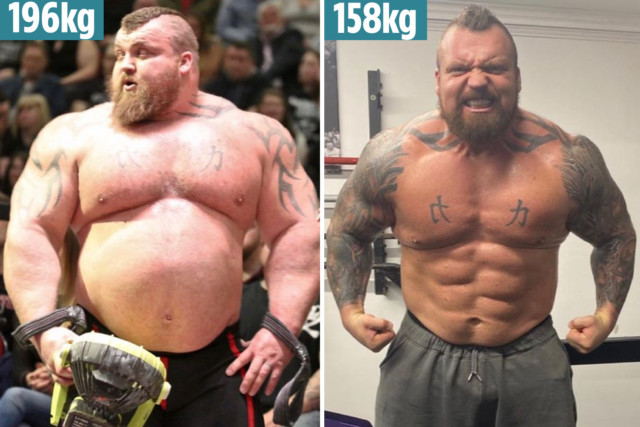 The Brit faces his strongman rival on September 18 in Las Vegas, dubbed ‘The Heaviest Boxing Match in History’.

Hall at the height of his power lifting career weighed 196kg, equivalent to 30 STONE.

But after last year agreeing to a grudge match in the boxing ring with Game of Thrones star Bjornsson, Hall has significantly trimmed down.

Hall is over two stone heavier than Nikolai Valuev, the heaviest champion in history.

Bjornsson, known as ‘Thor’ has had two exhibitions bouts in the lead up to his fight with Hall.

Firstly against Irishman Steven Ward and then against ex-English title challenger Simon Vallily at the end of May.

And afterwards, he warned: “Eddie Hall, you better be training your ass off because I’m coming for you, and I’m knocking you out – you’re going down.

“I respect you as an athlete, and I know you’re training hard, but I am going to knock you out, see you soon.”

Hall opted against warm-up bouts but has released ruthless sparring footage heading into the pay-per-view spectacle.