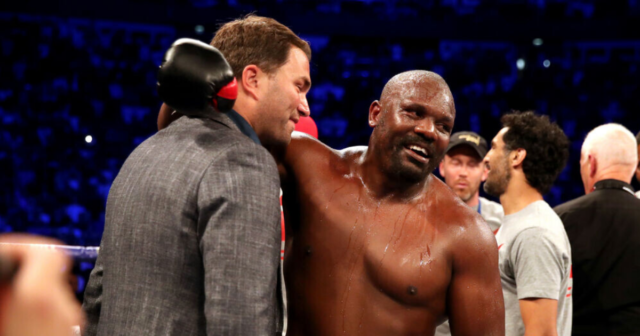 Del Boy is currently on a three-fight losing streak after a defeat to Oleksandr Usyk was followed by back-to-back losses to Joseph Parker in little over a year.

But despite talk of retirement, the 38-year-old Brit wants to face the Bronze Bomber as the American eyes his own return following his defeat to Tyson Fury in their trilogy fight.

And his Matchroom promoter has every confidence that the veteran could pull off a huge victory over the knockout specialist.

Speaking to Pitch Boxing, Hearn said: “I believe that Chisora, if he gets past three or four rounds, can actually beat Deontay Wilder.

“He would accept the fight with Wilder and it’s a good fight for Wilder.”

Chisora admitted last week that he likes the idea of fighting Wilder later this year.

During an appearance on talkSPORT, Chisora said: “I’m open to anything – I love fighting.”

Chisora’s willingness to face Wilder stems from his eagerness to share the ring with all the big names of his generation.

He continued: “What most people don’t understand is some people want to have the perception of being boxers on Instagram.

“I’m not that guy. I want to be that guy that when I sit down and everybody looks at my resume, I want to say, ‘You know what, I fought everybody.’

“I don’t want to let people decide for me, I decide for myself and be happy with the decision I make.

Hearn also stated previously that he loves the idea of a dust-up between the two heavy hitters, saying: “Deontay Wilder, we want to see you back in the ring. I’ve got the perfect guy for you – Derek Chisora.

“Come on, he’s getting on a little bit, he’s coming off three defeats on the spin now. Easy comeback fight for Deontay Wilder. Derek’s ready.”