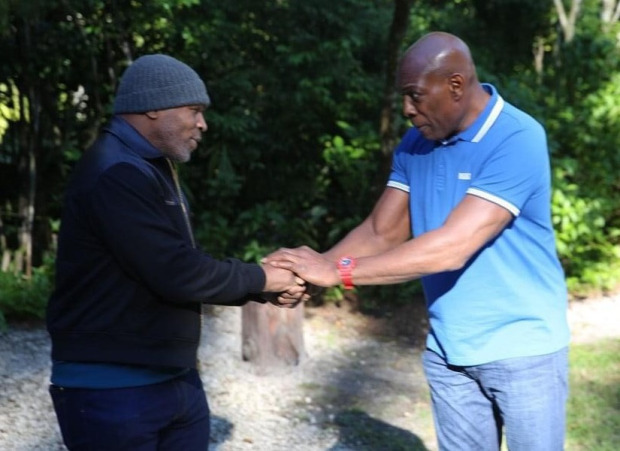 EMOTIONAL Mike Tyson choked back tears as he revealed the hardest fight of his life has been with his own self-destructive mind.

Boxing helped take a bullied, lisping boy and turn him into a ruthless snarling heavyweight monster, the youngest world champion in history.

Mike Tyson and former rival Frank Bruno met for a special documentary
Tyson, who has suffered with addiction and who served three years in jail for rape, which still he denies, admitted that his biggest problem has been his self-destructive mind

But Tyson’s emotions and mental stability were never developed as much as his punching power and his life disintegrated shortly after mentor Cus D’Amato died.

In a new Friday night documentary charting his brutal two-fight rivalry and loving friendship with Frank Bruno, Tyson told Sky: “I have the title of the ‘Baddest Man on the Planet’ and that is really funny to me.

“I am just one of those scary fighters but I come across as ferocious because it is my fear.

“It’s like fire, you can use it and command it and have it warm you. But if you let it get out of control it can kill you and everything around you.

“I don’t think about much but my mind is a torture chamber. It is not my friend.

“So I have to control it in order to have any stability in my life. And that is my biggest problem to date, staying in control.” 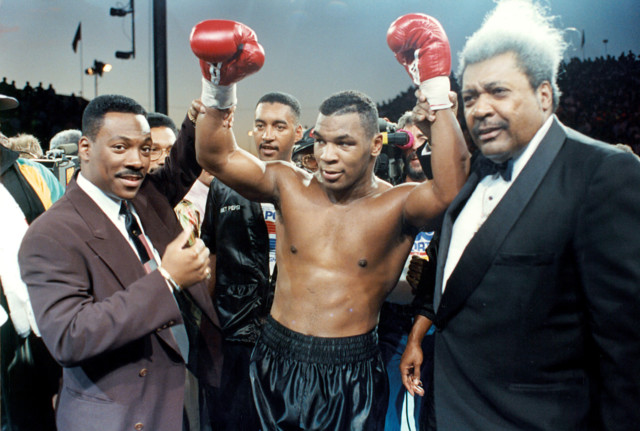 Tyson, pictured with Eddie Murphy and promoter Don King, is one of the most famous athletes ever

Tyson grew up confused and abandoned by his biological father and neglected by his addiction-battling mother.

At some stage during his childhood he has confirmed to being the victim of sexual abuse.

Later in life, when under the spell of boxing svengali Don King, Tyson’s behaviour spiralled out of control.

Breaking into a zoo in a bid to fight a gorilla, biting a chunk out of Evander Holyfield’s ear and bizarrely threatening to eat rival Lennox Lewis’ (at the time unborn) children were some of his tamest escapades.

“I was a totally different person back then, it seems like a million lightyears away,” the star of the Hangover films smiles. “I cannot even believe who I have become now.

“We are going to be so many things before we die, when we get to the end we realise ‘this is the person who I want to be when I leave’.

“Life has been about learning lessons and re-educating myself.

“The hangers-on leave when you have nothing left to give them, as soon as you hit rock bottom they leave.” 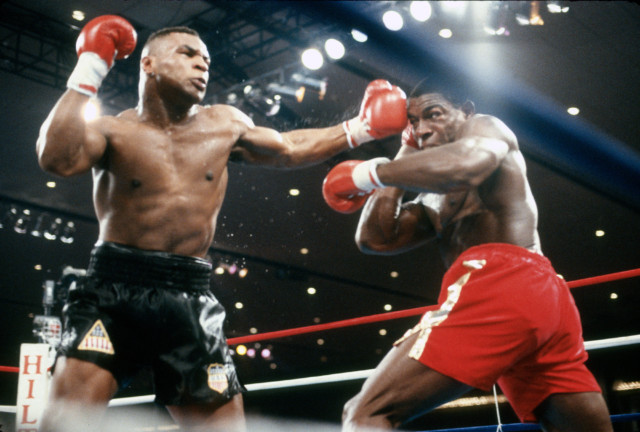 Tyson and Bruno fought twice for the heavyweight title, with the American winning both bouts

Despite his rollercoaster life, Tyson remains an almost mythical figure and retains the attention of each new generation.

There is no malice toward any of the people he feels betrayed him and he wants no pity from even his most dedicated fans.

He does however hope Bruno – who also battled crippling mental health problems after the retirement Tyson inflicted in their rematch – can enjoy his Autumn years.

“We are all crazy,” the cannabis lover grinned. “Frank Bruno went into one mental health facility, I’ve been in around 10 of them. 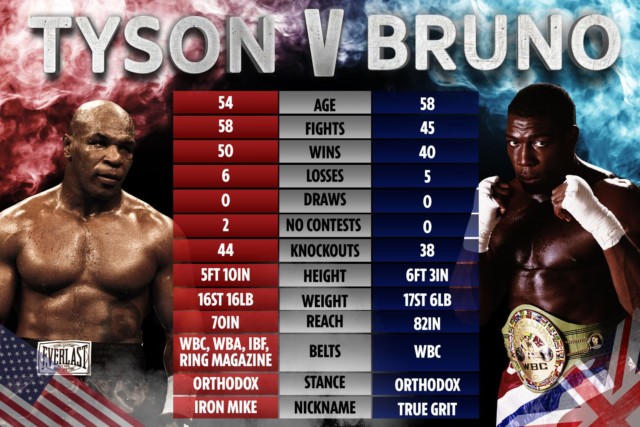 “This is just what we have to go through sometimes.

“I don’t feel sorry for anybody because I know that these are the journeys we all have to go on.

Choking back tears, he said: “And I don’t want anyone feeling sorry for me either.

“I know that the people over in England love Frank Bruno and he should take advantage of that.”

Advertisement. Scroll to continue reading.
In this article:asmuch, hasbeen, worldchampion