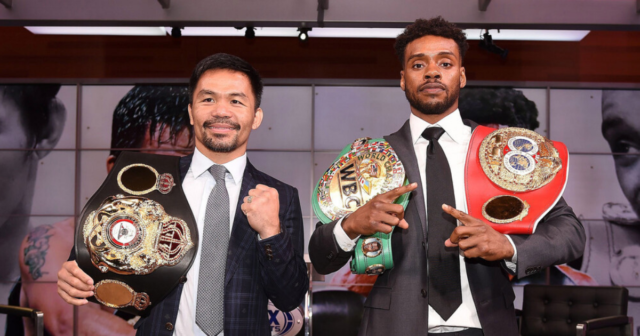 ERROL SPENCE JR has issued a statement after undergoing surgery on the detached retina that scuppered his big-money fight with Manny Pacquiao.

The IBF welterweight champion suffered the potentially career-ending injury in preparation for his August 21 showdown with Pacman.

Spence Jr’s injury was discovered by the Nevada State Athletic Commission on Monday during a pre-fight examination.

The 31-year-old went under the knife on Wednesday and provided an immediate update for his legion of fans after getting out of the operating room.

Alongside a picture of himself with a bandage on his right eye, The Truth wrote on Instagram: “Emergency surgery went great thanks to everyone for their well wishes & prayers. I’ll be back in no time.

“I look at it as, it could always be worse & being able to see my kids grow is the most important thing to me even tho I was telling the doctor let me fight this fight & I’ll get surgery right after doc wasn’t haven’t it.”

“Stil rocking the same colours my next fight so the merch will remain the same cause my fit was [fire emoji] lol.

“#BigFISh #StrapSeason & I know for a fact TEXAS was coming to take Vegas over for the weekend.”

Pacquiao – who will now face Yordenis Ugas a week on Saturday – was quick to wish Spence Jr a speedy recovery.

He said: “I want to say that I’m praying for Errol to make a fast recovery from his injury.

“Health is always the priority and the most important thing.”

Despite the late change in opponent, the Filipino is looking forward to his clash with the Cuban.

He said: “I did my best in training and in preparation for this fight.

“So I wanted to make sure my hard work was not wasted.

“Ugás was ready to fight and challenge me so it’s a great thing that I can show off my hard work in the gym when we face each other on fight night.

‘”I’m not disappointed at all in what happened because my hard work will not be wasted.

“Ugas stepped up and is bringing his WBA championship into the fight, which I’m excited to fight for.”

The 42-year-old added: “Ugás is a champion because they gave him my belt.

“Now, we have to settle it inside the ring.

“I cannot take him lightly because he’s the kind of fighter who will take advantage of that.”

Advertisement. Scroll to continue reading.
In this article:errolspence, onmonday, spencejr