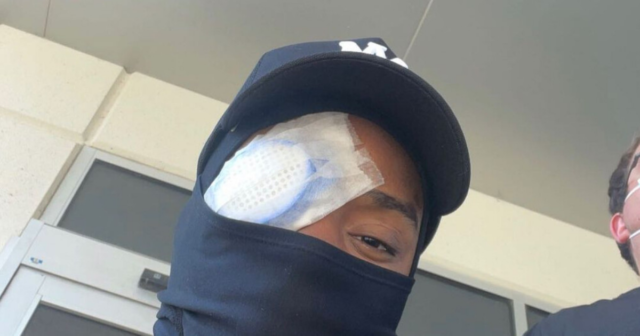 ERROL SPENCE JR has returned to training after successful surgery on his eye as he was pictured skipping in his gym.

The WBC and IBF unified welterweight champion was due to fight boxing legend Manny Pacquiao in August.

But two weeks beforehand, Spence was forced to withdraw after revealing an injury in sparring left him needing surgery on retinal tear.

Cuban Yordenis Ugas, 35, was elevated from the undercard and filled in to beat Pacquiao, 42, who announced his retirement soon after.

But Spence, 31, has now started training again as his coach Derrick James posted a picture of the American alongside light-heavyweight Marcus Browne, 30.

The unbeaten Texan beat Danny Garcia, 33, in a comeback last September, his first fight since escaping death in a horror car crash.

Spence was hit with a DWI (Driving While Intoxicated) after his Ferrari flipped in the high-speed accident in October 2019.

But he made a full recovery and convincingly beat Garica over 12 rounds.

Despite losing out on a super-fight with Pacquiao, Spence again wants to face the biggest names in the division.

But long-time rival Terence Crawford questioned how Spence will recover from the eye injury.

“Who knows if Errol Spence will ever be the same fighter that he once was when he was considered the boogeyman of the division?”