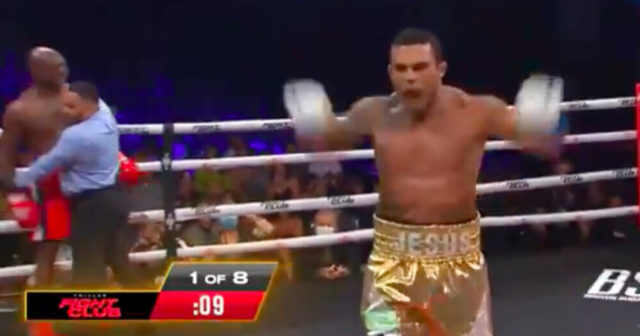 EVANDER HOLYFIELD’s shock boxing comeback lasted just a matter of seconds as he was stopped by MMA legend Vitor Belfort.

But the legend’s comeback was over in less than two minutes.

The fight started cagey with the ‘Real Deal’ edging the jab out before Belfort starting to come forward and had Holyfield on shaky legs.

The ex-boxer swung and missed as he slipped through the ropes as things started looking bad for him.

Holyfield then looked to be on skates whenever Belfort threw a punch and was soon dropped by a left hand.

Belfort then came forward as Holyfield tucked up and the referee quite rightly stopped the fight.

Predictably, Holyfield looked a shadow of himself and completely off the pace, but fortunately it was stopped before any damage could be done.

However, the veteran fight feels the official stepped in too quickly to stop it.

Afterwards he said: “I think it was a bad call.

Did you miss our previous article…
https://www.sportingexcitement.com/boxing/jake-paul-v-conor-mcgregor-could-be-a-lot-more-competitive-than-notorious-against-floyd-mayweather-eddie-hearn-claims