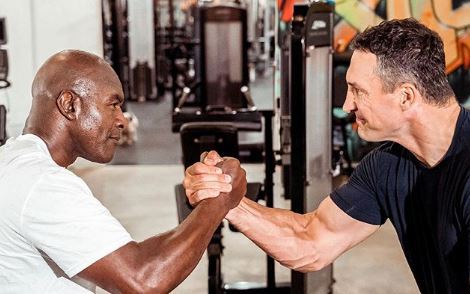 EVANDER HOLYFIELD has been snapped in the gym with former heavyweight champ Wladimir Klitschko.

The 57-year-old is gearing up for a sensational return to boxing.

And he has brought Ukrainian legend Klitschko into his training camp to help him prepare.

He posted a picture of the pair embracing in the gym on Instagram with teh caption: “Surround yourself with greatness.”

The two-division champ previously announced he would be looking to make a return to the ring.

Nine years after he last put on the gloves, Holyfield is looking to fight in exhibition bouts to raise money for charity. 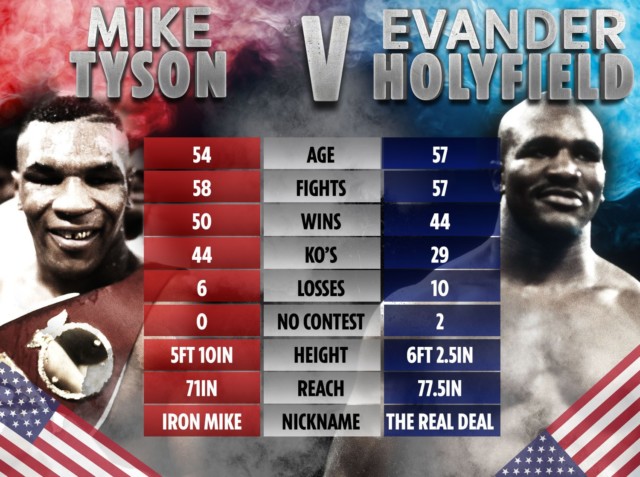 He has posted plenty of pictures of himself in training as he looks to get fighting fit.

One potential opponent is 53-year-old Mike Tyson with a trilogy fight between the two on the cards.

Iron Mike is planning a similar step out of retirement and hinted he would be open to the contest.

He famously bit a chunk out of Holyfield’s ear in their 1997 rematch.

Holyfield has also been challenged to a scrap by Riddick Bowe.

The body achieves what your mind believes. #teamholyfield

The veteran pair could get it on for a FOURTH time if the 52-year-old gets his way.

The American exclusively told SunSport: “It’s official. Actually, let me put it this way: I am officially back and want to and will fight.

Did you miss our previous article…
https://www.sportingexcitement.com/boxing/george-foreman-claims-bruce-lee-could-have-been-world-champion-boxer-as-he-was-so-good-he-left-him-with-chills