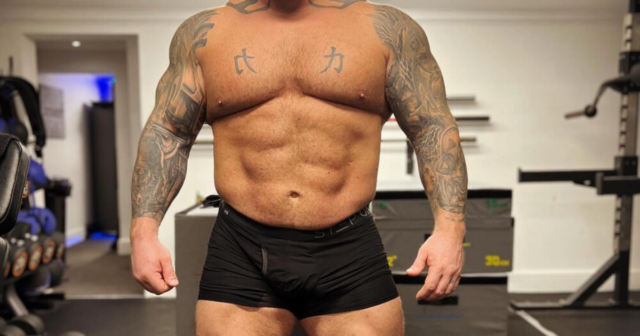 EDDIE HALL has revealed how he nearly bled to death after dropping a set of weights on his PENIS.

The former World’s Strongest Man, who will fight Hafthor Bjornsson this weekend in Dubai, had to be “stitched up” at the hospital after the horrific accident.

Hall, who has been crowned UK’s Strongest Man six times, has weighed in at 22st 3lbs for his grudge fight following a stunning body transformation.

The pair were originally scheduled to face each other in September, only for Hall to suffer a detached bicep.

Injuries aren’t uncommon for Hall, with the 34-year-old recalling in 2019 the time that disaster struck while he was training legs in the gym.

Quoted by the Mirror, he said: “I piled a load of heavy weights on a leg-press machine and then heard a loud thud.

“It has come crushing down and the weights had landed on my penis. I nearly bled to death.

“It was bad. The worst ever. I didn’t cry for help though.

“I just lifted them off, drove myself to the hospital and got stitched up. I was back training soon enough.”

Hall was crowned the World’s Strongest Man in 2017 after he finished ahead of Bjornsson and defending champion Brian Shaw.

Speaking exclusively to SunSport, Hall labelled Thor as a “c***” as he insisted he will knock out his rival in their six-round exhibition bout.

He remarked: “Thor, for whatever reason, looks like a skinny dog on heat.

“I’ve wanted an excuse to punch this man in the face for a long time. Where I’m from, if someone burns you, you bite their nose off.

“We had to get along for professional reasons whilst presenting Strongman shows, but this fight- this is real.

“I’m not a false person. I’m not two-faced. I hate Thor. And he hates me. We’re gonna settle this like men should settle things.

“This will not be left to the referee’s decision. This is either gonna be a knockout, or the fight will be stopped.

“Thor will either be on his back, or the referee’s gonna save his life before that happens. Just to finish up, Thor’s a c**t.”
In this article:eddiehall, hafthorbjornsson, thisweekend