Five UFC stars who could fight Floyd Mayweather, who wants to get in the ring with Khabib and McGregor for £482m payday
Advertisement 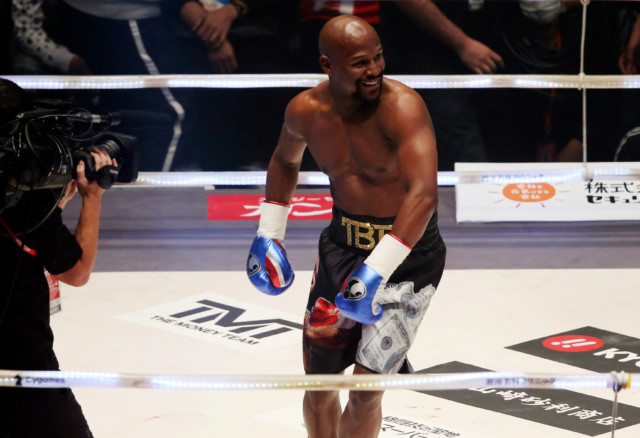 FLOYD MAYWEATHER looks on course to stick to his plan of coming out of retirement to fight once again – but has already warned it will NOT be against a boxer.

The 43-year-old regularly posts training clips in his Las Vegas gym, working on various bags with his speed and accuracy there for all to see.

Mayweather fuelled talks of yet another comeback last November, after announcing online he was “coming out of retirement in 2020” to work with UFC boss Dana White on a “spectacular event”.

He officially retired in 2017 after beating ex-UFC champion Conor McGregor, but did return a year later to topple featherweight Japanese kickboxer Tenshin Nasukawa in an exhibition bout.

And during a tour in the UK, Mayweather revealed he would not return to fight an “ordinary” boxer, insisting he had nothing to prove, and instead fancied another mega-money crossover bout.

He said: “It doesn’t make sense for me to fight just any ordinary fighter because I’m at the point right now where it’s about business, I’m a businessman.”

Here SunSports lists five UFC fighters who could fit the bill to face Mayweather, should he make yet another ring comeback.

Both Mayweather and McGregor have expressed an interest to rematch.

Mayweather even claimed he had spoken to White about fighting the Irishman and UFC lightweight king Khabib Nurmagomedov on the SAME day.

McGregor believes he is more prepared to face Mayweather having returned to his first amateur boxing coaches before his last win against Donald Cerrone.

After beating Cerrone, The Notorious insisted he will rematch Mayweather, as he said: “The discussions are always ongoing. They never stop. You know Floyd is going through money fast.

“He’s far from retired, and that rematch will happen at some stage.”

Straight after, Mayweather uploaded a mocked up poster of him and McGregor appearing to confirm his interest in a rematch. 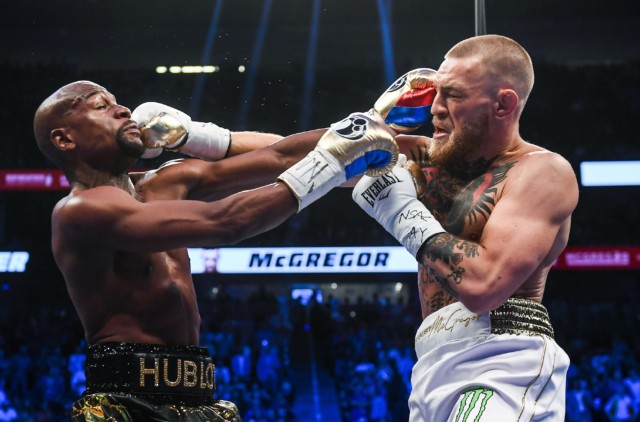 After undefeated UFC champion Nurmagomedov beat McGregor a year after Mayweather’s stoppage victory in the ring, the Russian began to trade words online with the retired American.

Since then Khabib has poured cold water on the bout, insisting it would only be a “money fight” rather than a legitimate one to enhance his legacy.

But Mayweather still confirmed in March that he would “absolutely” face the Dagestani hero, but would demand £240m to do so.

Mayweather would have to put his 50-0 unbeaten record on the line, but would likely feel more comfortable doing so against Nurmagomedov, an esteemed grappler with less threat in his boxing ability.

Abdelaziz remains in contact with the 43-year-old superstar, meaning a deal is still possibly on the cards. 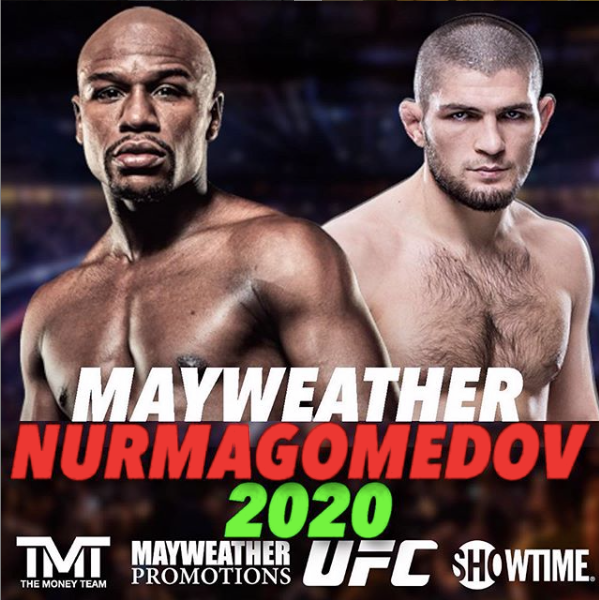 Mayweather shared this mocked up poster in January

Masvidal enjoyed a meteoric rise to stardom in 2019 with wins against Darren Till, Ben Askren and Nate Diaz.

After beating Diaz, the 35-year-old revealed his desire to get involved in the business of crossover bouts, calling out Canelo Alvarez – who has replaced Mayweather as boxing’s top attraction.

But Masvidal then tweeted: “Yes it is true. I can make 154” as he told fans he could drop down to fight Mayweather at 154lb – the same weight McGregor boxed the American.

And the UFC welterweight later insisted he would give Mayweather a better fight than The Notorious did, accusing the Irishman of running out of steam by round eight.

Masvidal told TMZ Sports: “I can box my a** off. Not saying I’m a better boxer than Mayweather, but man, I’m gonna be in there with bad intentions trying to hurt him.

“I’m a well-conditioned athlete that’s not gonna fade. I’m not gonna fade in the eighth or ninth round. I’m gonna be there for the whole night.” 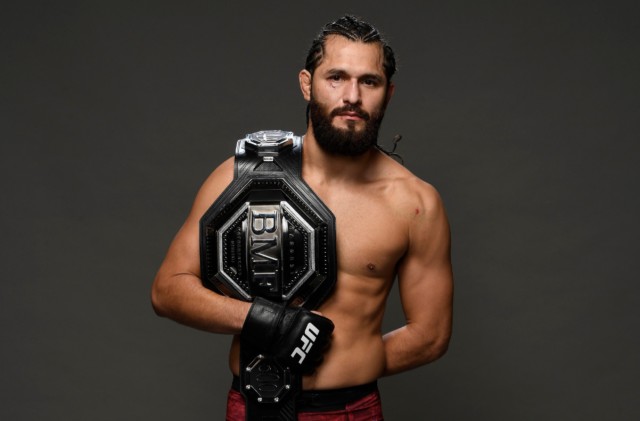 Jorge Masvidal has called out both Mayweather and Canelo Alvarez

Poirier, who has been beaten by McGregor and Nurmagomedov in the past, has previously revealed his desire to box as professional.

UFC boss White still plans to launch his own boxing promotion, and Poirier called out Nick and Nate Diaz to a fight in the ring.

Poirier told MMAJunkie in January: “I’d be willing to box him if they wanted to do that.

“I wish Zuffa Boxing was around and we’d have an opportunity – him and his brother were always talking about crossing over to boxing, I’d love to put the paws on him and show you guys my boxing skills.”

With McGregor plotting a path back to the UFC title, and Nurmagomedov set to defend his belt against the winner of Tony Ferguson and Justin Gaethje, Poirier provides a solid alternative for Mayweather.

The 31-year-old southpaw is yet to call Mayweather out, but could garner the right amount of attention following his previous comments about wanting to make a boxing switch. 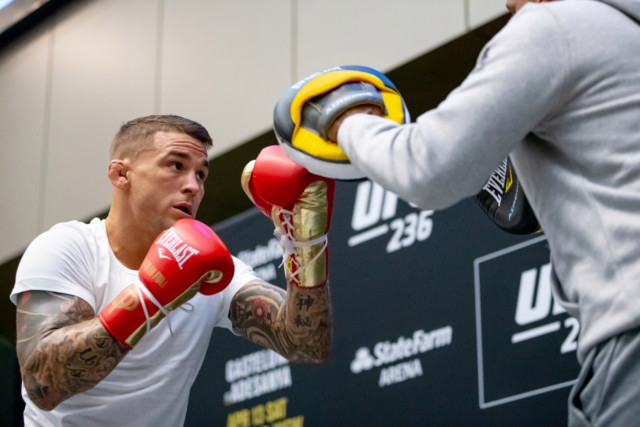 Former bantamweight champion Dillashaw is currently serving a two-year suspension for a failed drug test before his January 2019 loss to Henry Cejudo.

But the 34-year-old – who has sparred pound-for-pound great Vasiliy Lomachenko – said during his time on the sidelines he can transition into a boxer should Mayweather be seeking a renowned name to fight.

He told ESPN in November: “Mayweather wants a UFC star that’s good at striking. I’ve got a whole year to reinvent myself to become a boxer.

“I’ve got the who’s-who in the boxing world. I can train with the Lomachenkos, Terence Crawfords – he ain’t going to be able to wear me out and finish me because of my cardio.

“I think that’s a very intriguing fight. I’d love to get that Mayweather fight, not even for the money – just for the fact of proving us UFC fighters (have) got what it takes to get in that ring.”

“I think Conor McGregor did a great job of showing what we can do, and that our movements are awkward and that it’s tough for (boxers) to deal with, and I’ve seen it myself in the boxing world. I think that would be a super intriguing thing to get involved in, and I’ve got the time to do it.” 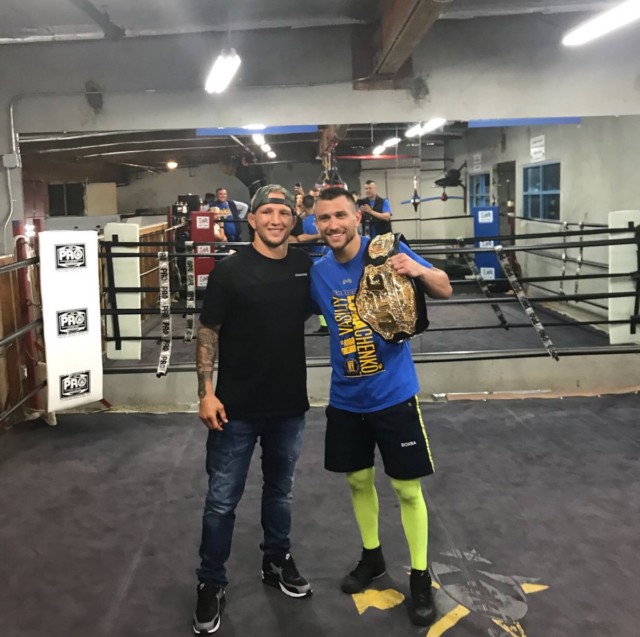 TJ Dillashaw has sparred with Vasiliy Lomachenko and called out Mayweather
In this article:floydmayweather, onceagain, outofretirement