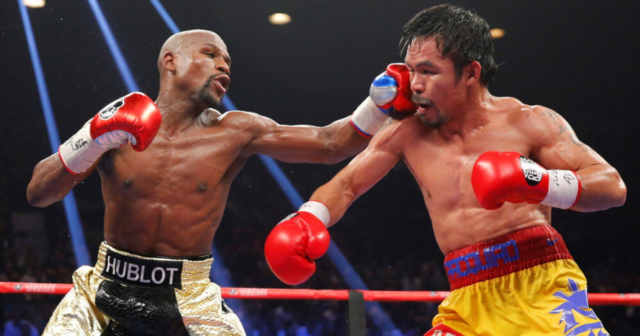 FLOYD MAYWEATHER has confirmed he will take on Manny Pacquiao again… in a charity basketball match.

Mayweather famously beat his great Filipino rival in 2015 on points, in the most lucrative fight of all time, selling a US record 4.6million pay-per-views.

Pacquiao, who claimed to have fought with a torn rotator cuff, called for a rematch but was always denied.

And SunSport reported how the pair were set to settle their beef in a charity basketball match instead.

Mayweather has now confirmed plans are indeed in the works for a game to take place in January in the Philippines.

And they are set to be joined by a number of famous faces from the world of basketball.

Mayweather said: “Me and Pacquiao actually, I think we’re going to play basketball in the the Philippines.

“That’s coming up soon, I think January. We’re going to play a little bit of basketball.

“We’re going to take some guys out there, we’ve got some former NBA players and a couple of AND1 players, so it’s going to be interesting.”

Mayweather’s revelation comes after a contract was leaked earlier this year.

However, it stated the match was set to take place in December, and would be held in Las Vegas instead of the Philippines.

It read: “We, the undersigned, are the main proponents and protagonists of the proposed “Mayweather vs Pacquiao All-Star Basketball Charity stated in December in Las Vegas, NV.

“Date of the event is TBA (to be announced) following the finalisation and availability of the venue.

“We agreed on the main concept of the event, which is to bring total entertainment to the fans of boxing, basketball, and all sports in general, and to create a project that will solidify our legacies to the fans.

“We also aim to generate funds for our chosen charities in time for Christmas.”