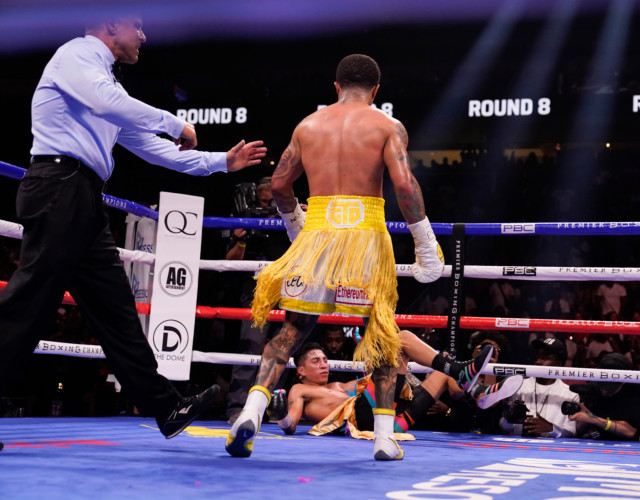 The former super-feather world champ, 26, ventured up to super-lightweight to take on the 26-0 challenge who was six inches taller.

And, when he found it tough to get inside the guard of his towering opponent, Money Man earned his cut by telling him he was down on the cards and needed to hunt down a trademark KO.

The heavy-handed banger, with the softest voice, whispered: “I just had to catch him.

“He was tough and it was tough getting to him because he was tall and had a longer reach but as soon as I got to him I got the job done.

“I was definitely having fun in there, I was nervous the whole night because I did not know if I would hurt him because he is two weight classes heavier.

“Floyd was telling me to press him but I did not want to get caught.

“Floyd told me I was down on the unofficial scorecards around round seven or eight so I had to pick it up and show my greatness.”

After dropping Barrios twice in the eighth and getting the job done in the 11th, the undefeated Mayweather protege has now won 24 of his 25 fights inside the distance

And, with the boxing legend in his corner, Davis can lay claim to being the most exciting fighter on the planet with his highlight reel growing again.

Last time out the Baltimore bad boy destroyed three-weight champ Leo Santa Cruz with an uppercut that won KO of the Year.

This performance, in the 10st division Scotland’s Josh Taylor rules as undisputed champ, was more of a sustained and technical cracking of a very tough nut.

Team Davis has insisted their superstar charge will not continue up at 140lbs and was just having fun testing the water at the new division.

But fight fans will now dream of lightweight clashes against undisputed champ Teofimo Lopez or high-profile challengers like Ryan Garcia and Devin Haney.

And Mayweather believes his star student has the promise and power to be one of the finest stars in the history of the sport.

He said: “He has the potential to be one of the greatest ever.

“And that you’ll be one of the best someday. I’m proud of him.” 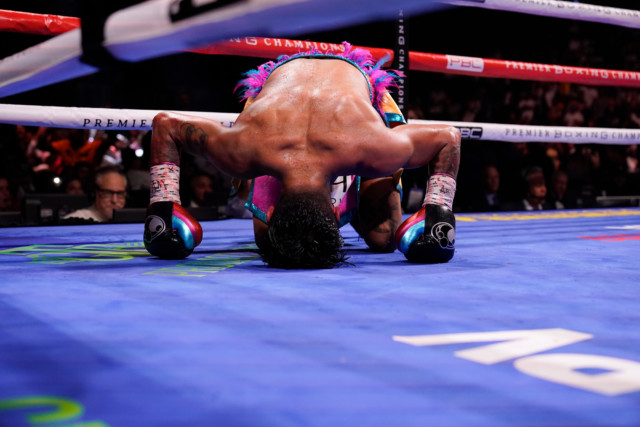 Mario Barrios was dropped twice in round eight
Advertisement. Scroll to continue reading.
In this article:floydmayweather, mariobarrios, worldchamp