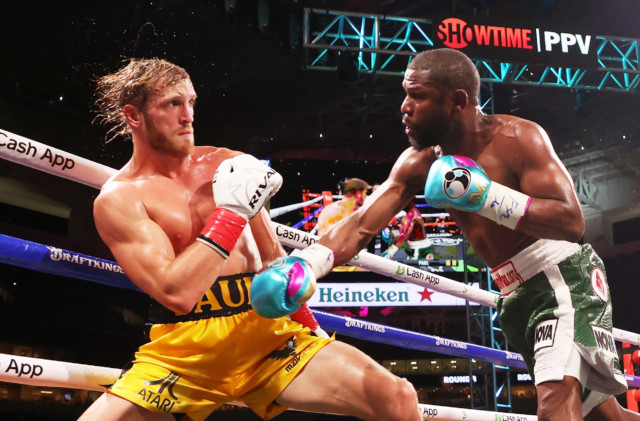 FLOYD MAYWEATHER offered Jake Paul ‘a real fight’ but warned the YouTuber would need to come down TWO STONE in weight to 154lb.

Mayweather made his return to the ring last weekend against Jake’s older brother Logan in an exhibition bout in Miami.

But before the spectacle bout, Jake put himself in line to face the boxing legend after stealing his hat at a press conference.

The social media star told SunSport he would fight Mayweather, but only in a professionally sanctioned contest, rather than an exhibition.

His demand appeared to be met, but he was told it would mean shedding over two stone to make it happen.

Before Mayweather fought Logan, he told entrepreneur Rob Moore: “Jake Paul talked about me and him fighting in a real fight.

“If Jake Paul can come down to 154 pounds, then we can see his skills.”

In contrast, Mayweather weighed in a career heaviest 155lb before he shared the ring with Logan, who scaled 189lb.

The size difference proved decisive, as Logan was able to survive the full eight round distance.

And despite Mayweather’s pre-fight offer to Jake, 24, he later poured cold water on fighting again.

He said at the post-fight press conference: “As far as me fighting again, absolutely not. As far as me doing another exhibition, probably not.”

Did you miss our previous article…
https://www.sportingexcitement.com/boxing/tyson-fury-offers-to-help-deontay-wilder-overcome-mental-issues-after-rival-lost-the-plot-completely-ahead-of-trilogy