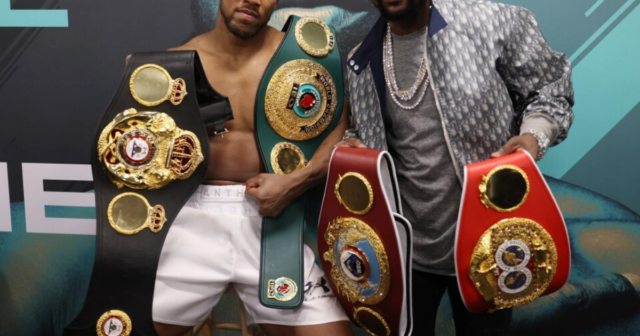 FLOYD MAYWEATHER has once again signalled he wants to train Anthony Joshua ahead of his rematch with Oleksandr Usyk.

The former unified heavyweight champion lost his belts to the Ukrainian with a tame performance at Tottenham Hotspur Stadium in September.

Anthony Joshua and Floyd Mayweather have struck up a friendship

The pair are due to face each other again early next year – although promoter Eddie Hearn has revealed shock talks that could see Joshua step aside.

But if he does go on to try to reclaim his WBA, IBF and WBO, he could have former pound-for-pound king Mayweather in his corner.

And suggesting he should think about splitting with current coach Rob McCracken, Mayweather said: “I told him from the beginning, I told him to come and I could teach him some pointers.

“A lot of the time, this is just my take, the same coach you had as an amateur doesn’t always make you a great professional.

“At the amateurs, he was teaching me like a professional, so I’m going to always speak real whether people like it or not.

“I feel like Anthony Joshua, they’re going to different coaches and saying ‘this coach is going to work with him’.

“But I told him at the beginning when he was undefeated ‘you’ve got some things you need to tweak because if you don’t then you may come up short’.”

Joshua and Mayweather have struck up a friendship in recent years, with the latter saying he was keen to help out in any all-British blockbuster with Tyson Fury.

AJ’s defeat by Usyk has put paid to that – at least for the time being.

And now Hearn has sensationally revealed Oleksandr Usyk’s team are in talks over stepping away from the rematch.

The promoter revealed the slick southpaw is now eyeing a clash with Fury for his WBC belt instead.

Did you miss our previous article…
https://www.sportingexcitement.com/boxing/jojo-diaz-inspired-by-george-kambosos-jrs-heroics-as-he-vows-to-beat-devin-haney-and-land-undisputed-fight-with-aussie