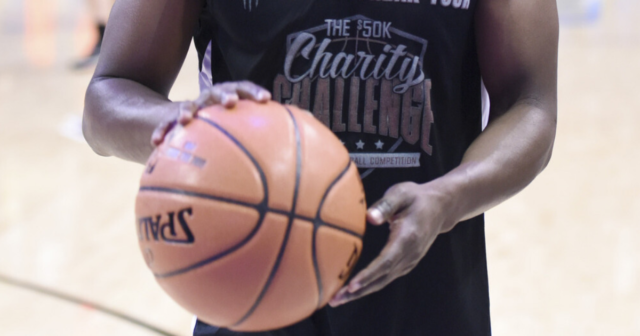 FLOYD MAYWEATHER is set to rematch Manny Pacquiao in Las Vegas in December… on the basketball court for charity.

Mayweather famously beat his great Filipino rival in 2015 on points, in the most lucrative fight of all time, selling a US record 4.6million pay-per-views.

Pacquiao, who claimed to have fought with a torn rotator cuff, called for a rematch but was always denied.

But now, according to Philippine sports website Spin PH, the pair have agreed to a charity basketball game.

In a leaked contract it includes both Mayweather and Pacquiao’s promotional companies and has their signature.

It reads: “We, the undersigned, are the main proponents and protagonists of the proposed “Mayweather vs Pacquiao All-Star Basketball Charity stated in December in Las Vegas, NV.

“Date of the event is TBA (to be announced) following the finalization and availability of the venue.

“We agreed on the main concept of the event, which is to bring total entertainment to the fans of boxing, basketball, and all sports in general, and to create a project that will solidify our legacies to the fans.

“We also aim to generate funds for our chosen charities in time for Christmas.”

Both retired boxers will be allowed to have two ex-NBA stars in their ten-player squads for the game.

The match could happen before Pacquiao’s birthday on December 17, potentially at the MGM Grand Garden Arena, the scene of their fight.

Mayweather, 44, is a keen basketball player despite standing 5ft 8in and is a close friend of point guard Isaiah Thomas and NBA legend Allen Iverson.

Pacquiao, 42, who is even smaller at 5ft 6in, was a former professional basketball player in the Philippines.

The eight-division champion would play as part of his training regime from 2014-2018 before retiring to focus solely on boxing.

But in an interview with SunSport before his final fight, PacMan revealed shooting hoops for fun was one of the ways he keeps in shape.

Pacquiao was due to fight Errol Spence Jr, 31, at the time but the unbeaten American pulled out with an eye injury.

Instead, Cuban Yordenis Ugas, 35, was elevated from the undercard and went on to win by points.

Pacquiao soon after emotionally announced his boxing retirement to run for presidency of his nation next year.