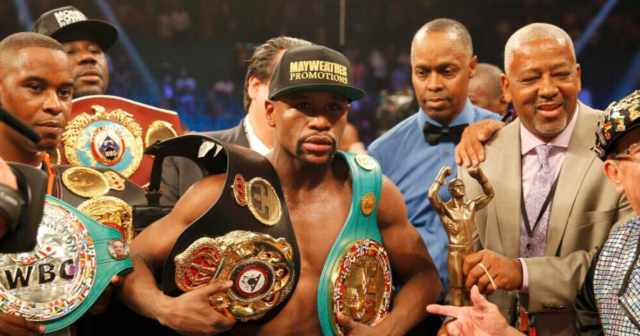 FLOYD MAYWEATHER’S coach is still ‘very optimistic’ the boxing legend WILL return to professional boxing and put his ‘flawless record on the line’.

Mayweather officially retired in 2017 after beating UFC superstar Conor McGregor and extending his record to a historic 50-0.

Floyd Mayweather’s coach is ‘very optimistic’ he will return to put his ‘flawless record on the line’Gerald Tucker, left, pictured next to Floyd Mayweather

But it proved not to be the final time fans saw the pay-per-view king in the ring, following two exhibitions comebacks since.

Mayweather’s most recent was a Miami spectacle against YouTuber Logan Paul, in which Gerlad Tucker served as the American icon’s head trainer.

The two are now in camp together once more for another exhibition, and Tucker warned with so much money to be made, it will not be their last.

But in a stunning twist, the boxing trainer is quietly confident a motivated Mayweather could one day return and defend his unblemished record for real.

Tucker said: “I think he’s going to fight a couple of times every year.

“It’s great money and there’s people like me, huge fans of Floyd’s style that want to see him in the ring just displaying his skills, that are unmatched in the history of the sport.

“I think he’ll do that just for people like me. But, I’m also optimistic we may see Floyd fight one day.

“I’m not giving up any secrets or anything, I’m just hopeful, I feel it.

“Nothing from anything he’s said, just from the way he looks in the gym and how easy it is for him to beat people up in sparring.

“And I mean guys who could become a world champion in the next year or two.

“So yeah, I’m very optimistic we’ll see him in the ring one more time and put his unbeaten, flawless record on the line.”

Mayweather, 44, first returned in Tokyo on December 31, 2018, beating Japanese featherweight kickboxer Tenshin Nasukawa, 23, in one round.

Then last June he was taken the distance by Paul, 26, who weighed TWO STONE more in the eight-rounder.

Now, Mayweather is in talks to face another YouTuber in 20-year-old ‘Money Kicks’ on February 20 on top of a Dubai HELIPAD.

Money Kicks – real name Rashed Belhasa – has only one year and two celebrity bouts worth of boxing experience.

But Mayweather, who always prided himself on perfection, will never let his gold-standards slide, no matter who the opponent.

Tucker said: “A lot of people who have reached that elite-status level in their careers are the same, they care about their name, their legacy, how they looked each and every time.

“No matter what the circumstances, you’re going to care how you look and be self-satisfied.

“That’s why you never catch him slipping, he’s always working out just in case.

“We call each other on FaceTime between camps and we’ll be on the treadmill or we’ll be outside running, just staying in shape.

“He’s always ready, he’s taking it as seriously as if it was a real fight.” 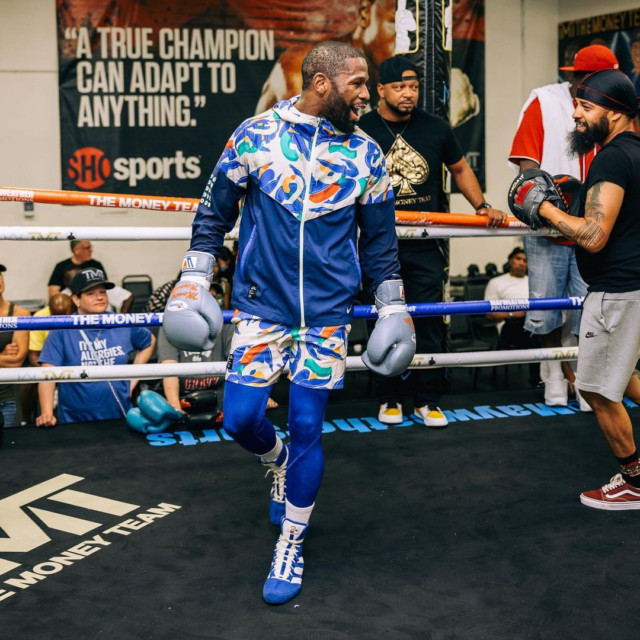 Floyd Mayweather training with Gerald Tucker before his exhibition with Logan Paul
In this article:boxinglegend, officiallyretired, ontheline