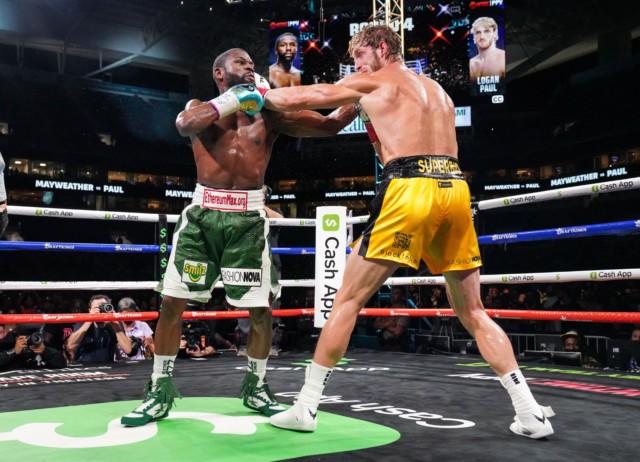 FLOYD MAYWEATHER and Logan Paul’s exhibition fight generated at least one million pay-per-view buys, it has been reported.

Boxing legend Mayweather was taken the full eight round distance by YouTube star Paul in their Miami showcase bout.

The demand was so high on the night Showtime’s app crashed due to the volume of customers.

And while the final box office numbers are still being totalled, according to BoxingScene, it is expected to come close to a million buys.

Website Fanmio, who offer fans the chance to interact with their heroes online, worked together with Showtime to air the event.

Showtime in 2012 tied Mayweather down to a then-record breaking deal worth £150m.

The unbeaten icon, who officially retired after beating McGregor and moving 50-0, had no problems in boasting about his latest pay day.

Unfazed by not scoring a knockout win against Paul, Mayweather was instead more focussed on celebrating another money-spinner.

He said: “So who’s really the smartest one in the sport of boxing? When it comes to legalised bank robbing, I’m the best.”

Mayweather won a similar exhibition bout in 2018, as he wiped out featherweight kickboxer Tenshin Nasukawa in one round in Tokyo.

But after failing to do the same to Paul, 26, to the surprise of many, he appeared to hang up the gloves for good.

Mayweather said: “As far as me fighting again, absolutely not. As far as me doing another exhibition, probably not.”