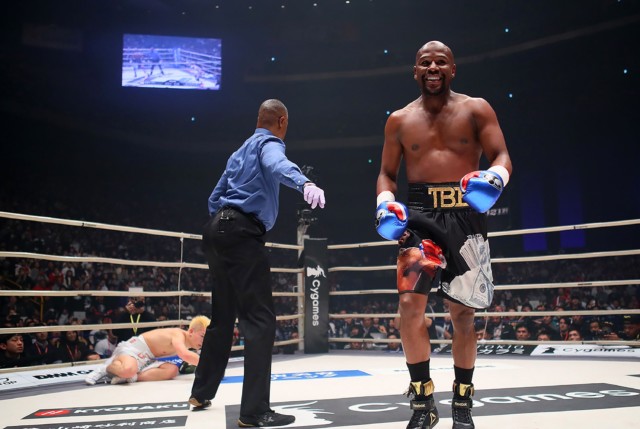 FLOYD MAYWEATHER confirmed his exhibition fight in Tokyo has been postponed due to a surge in coronavirus cases in Japan.

Mayweather travelled to the Far East in 2018, where he stopped featherweight kickboxer Tenshin Nasukawa in one round.

Floyd Mayweather in his last exhibition against Tenshin Nasukawa

It was the last time he was in the ring, but last year the 43-year-old revealed he would box once more in Tokyo.

But his comeback, to work alongside the ‘Mega 2021 event’ on February 28, has been backdated.

Mayweather said: “Japan currently has an increase in coronavirus infections, and I heard that foreigners aren’t allowed into the country.

“So it’s really disappointing, but there’s no way I can fight in Japan on February 28.

“When I’m allowed into Japan, and if Mega gets a new date and a venue, and if they give me an opponent, I can be ready to fight any time.

“I’m praying that we can beat the coronavirus and go back to a world that’s crazy about sports.”

Japan had just under 1,500 new Covid-19 cases by the end of November but in the second week of January it reached almost 8,000.

This is now the second time Mayweather has had to delay his return to the ring.

He was due to fight YouTuber Logan Paul on February 20, one week before his planned exhibition in Tokyo.

But the pay-per-view spectacle has since been rescheduled for a later date.

Despite the setbacks, Mayweather announced on his Instagram that he plans to focus on fighting again in 2021.

But he has always maintained in the past he will not risk his health and unbeaten 50-0 record to face boxing’s current champions or prospects.

Instead, the American legend has lined up Logan, 25, and his brother Jake, 24, as well as rapper and ex-best friend 50 Cent – while confirming his intent to go back to Japan.

Mayweather wrote on Instagram: “This year I will focus on several exhibitions. I will have an exhibition in Tokyo, Japan again.

“Of Course the one with Logan Paul and I; and if Jake Paul can get past his next opponent Ben Askren, I will have an exhibition with him as well.

“I also heard that 50 cent would fight me but claims I’m too small. If he wants to lace up at the end of the year, we can do an exhibition then.

“I don’t care about weight class with any of these guys.

“The Paul brothers will make great money with the events, but with 50 cent It has to be “Winner Take All”.”