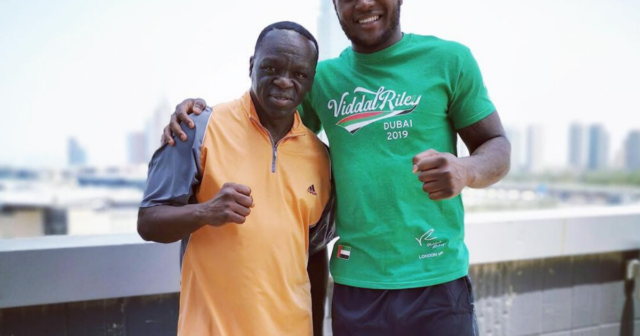 VIDDAL RILEY ‘would kill’ Jake and Logan Paul in ONE ROUND, his trainer Jeff Mayweather said.

Riley is 4-0 in his professional career after an accomplished run in the amateurs, which even saw him compete in the Youth Olympics.

He is signed to Floyd Mayweather’s promotion and trained by the boxing legend’s uncle Jeff.

Younger brother Jake has even called out the Londoner, but Jeff warned it would not end well for the social media star.

He said on The Mayweather Channel: “Viddal would kill him in one round, him and his brother.”

Having been informed that Logan’s brother called out Riley, Jeff responded: “Jake will say that.

“Because Jake is a smart businessman, ‘I’m going to say and do this but my coach will say no, I’m not going to let you get killed’.”

Riley, 24, has stopped training KSI, 28, to instead focus on his own career but has not been able to return since February 2020.

The Paul brothers meanwhile continue to make headway in the fight game, with Logan, 26, recently facing Mayweather, 44, in an exhibition.

And after he avoided a knockout loss, no winner was declared, resulting in a moral victory for the American celebrity.

And Jeff has backed him to remain unbeaten, but falls short of giving too much praise.

He explained: “It don’t mean s***. Because, like I said, once Jake fights a fighter, then I will give him some real credit.

“Because what I think is this, if you’re going to to keep doing this – and don’t get me wrong, if I was Jake Paul, I’d probably be doing the same thing.

“Because, all he needs to do is fight names. He doesn’t have to fight a legitimate fighter at all, period. He’s still going to be paid top dollar.