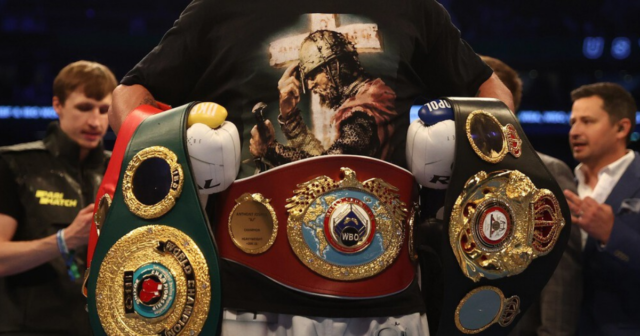 TYSON FURY bottled an undisputed fight against Oleksandr Usyk, according to the Ukrainian’s promoter.

The Gypsy King was in talks to face the former undisputed cruiserweight champion as they prepared to pay Anthony Joshua and Dillian Whyte step aside fees.

And Eddie Hearn, who promotes both Joshua and Whyte, has revealed Usyk’s representatives believe it was Fury who scuppered the deal.

“Not, ‘Hang on, I’ll just do a few posts on Instagram pretending I wanna fight him.’

“I spoke to Alex Krassyuk [Usyk’s promoter] last night – they feel that Tyson Fury has bottled the fight vs Usyk.”

These comments from Hearn suggest Joshua was up for stepping aside to allow a Fury-Usyk clash.

But Fury now looks set to take on mandatory challenger Dillian Whyte next after the WBC champion’s promoter Frank Warren won the purse bid on Friday.

That frees up Joshua to rematch Usyk in an attempt to reclaim the heavyweight belts he lost at the Tottenham Hotspur Stadium last year.

And Hearn confirmed prior to the Fury-Whyte purse bid that the all-British clash is expected to take place before the end of April.

Usyk-Joshua II will then be around May time.

Hearn said: “I think April 29 is the date if we win the purse bid we have to do the fight by.

“So we have to do that fight by then. That’s Fury against Whyte.

“AJ, I think will be a little bit later. I think that’ll be in May. So I think you’ll see Fury-Whyte in April. I mean if we win the bid.

“If Frank [Warren] wins the bid, maybe he does [it on a different date].”

Warren did go on to win the bid and released a statement insisting a date and venue will be announced in due course.

Did you miss our previous article…
https://www.sportingexcitement.com/boxing/floyd-mayweather-showing-the-youngsters-how-to-work-hard-aged-44-after-great-rounds-of-boxing-in-training-for-return