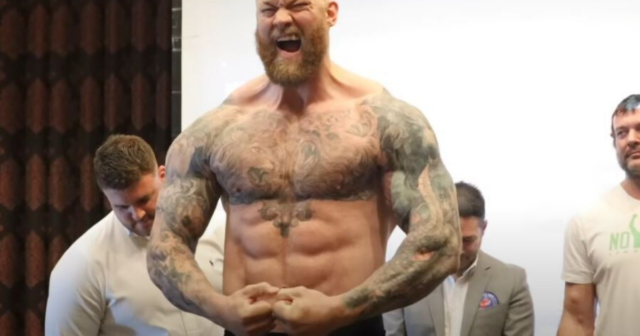 HAFTHOR BJORNSSON weighed in three-and-a-half-stone heavier than his next boxing opponent Devon Larratt.

The Game of Thrones Star has been preparing for his super-heavyweight fight with strongman rival Eddie Hall over the past year.

They were even meant to fight this weekend, before Hall was forced to withdraw after suffering a bicep injury in training.

So instead, Bjornsson, 32, will fight world No1 arm wrestler Larratt, 46, in an exhibition bout in Dubai.

The Icelandic actor – who has already lost NINE STONE – weighed in for his third boxing bout at 23stone.

Bjornsson – known as ‘Thor’ – has boxed in two prior exhibitions to prepare for his grudge match with Britain’s Hall.

The first was against Irish cruiserweight Steven Ward, 31, and the second with England’s Simon Vallily, 36.

Hall, 33, opted against the warm-up bouts, which he slammed as ‘fake’ but revealed there has been put to the test behind closed doors.

He told Muscle and Health: “I’ve been doing some good exhibition fights as well, not just sparring, so I’m actually getting in the ring with guys who want to take my head off and that’s what it’s all about.

“It’s about trying to take someone’s head off. Unless you’re actually in the ring with someone trying to take you down, you’re never going to experience that.

“You can be like Thor and you can set all these fake exhibition fights where guys are told to tickle you and not really take your head off, but that won’t do you any favours. That’s just teaching you to be tickled.”

Did you miss our previous article…
https://www.sportingexcitement.com/boxing/boxer-who-sparred-both-anthony-joshua-and-oleksandr-usyk-fears-for-ukrainian-after-experiencing-brits-explosive-power