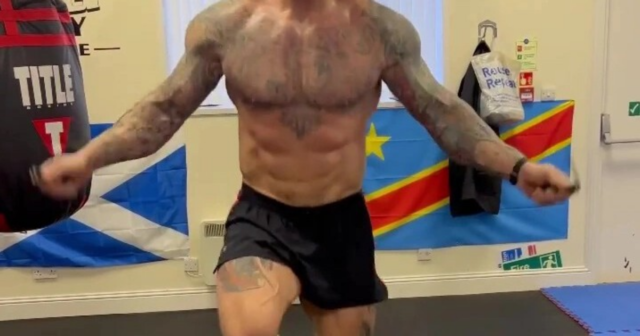 HAFTHOR BJORNSSON has taken social media by storm after unveiling his SHREDDED physique ahead of his clash with rival Eddie Hall.

Bjornsson and Hall are expected to lock horns in a boxing match at some point in 2022, with March being touted as a potential date.

The Game of Thrones star was scheduled to face his former Strongman foe in September but the British Behemoth suffered a detached bicep in the summer to delay the fight until next year.

The Icelandic superstar instead faced arm wrestler Devon Larratt as a short-notice replacement in Dubai and won comfortably with a first-round knockout.

The 33-year-old giant, who played Gregor ‘The Mountain’ Clegane on Game of Thrones, is getting ready for this highly-anticipated match-up and is putting himself through his paces in a big way.

Thor’s incredible workout seems to be paying off as he appears to have cut a huge amount of mass in a video shared on Instagram showcasing his newly trim physique.

Bjornsson captioned it with the following message: “My fat [percentage] is getting pretty low guys. How do you like the new half-Thor?”

Fans were left stunned and took to the comments’ section to express their awe.

One fan commented: “Thor is impressive how you are changed.”

And another wrote: “You look like a super hero. Pretty cool looking.”

Did you miss our previous article…
https://www.sportingexcitement.com/boxing/tyson-fury-ordered-to-defend-heavyweight-world-title-against-dillian-whyte-in-2022-in-all-british-superfight