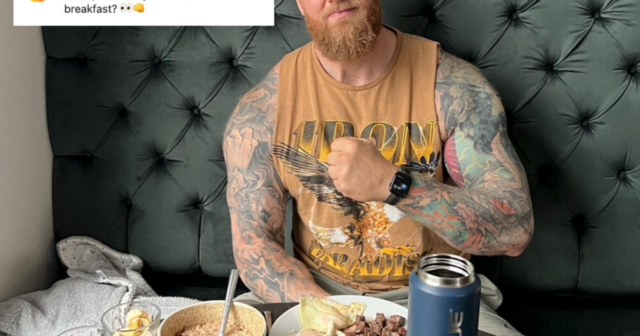 HAFTHOR BJORNSSON, the former World Strongest Man, has posted a picture online of his incredible “breakfast for champions” while he continues to call out Tyson Fury.

The man nicknamed Thor uploaded his image to Instagram with a clenched fist and asked: “Do you eat steak for breakfast?”

The 33-year-old is seen with steak, eggs, yogurt, cereal, fruit and a protein shake.

Another was simply amazed by the portion and said: “Oh my god.”

Others joked: “All that food for breakfast just made my stomach turn.”

Thor recently turned his hand to boxing and is so far undefeated in four fights.

He has called out Tyson Fury for a 600lbs showdown in the ring.

The duo have exchanged insults over social media with the Icelandic star saying he was: “100% up for the war”.

Meanwhile Fury retaliated saying: “I wonder if Thor Bjornsson could take a crashing right hand to that big jaw?”

On another occasion he said: “Thor!! I’m coming for you, Thor. You’re getting it, sucker. There’s only room for one big dog and that’s me!”

The former Game of Thrones actor is 6ft 9in like the WBC heavyweight champion.

The biggest name Thor has fought in a boxing match is strongman rival Eddie Hall, who he called out in May 2020 after he broke the Brit’s 501kg deadlift record.