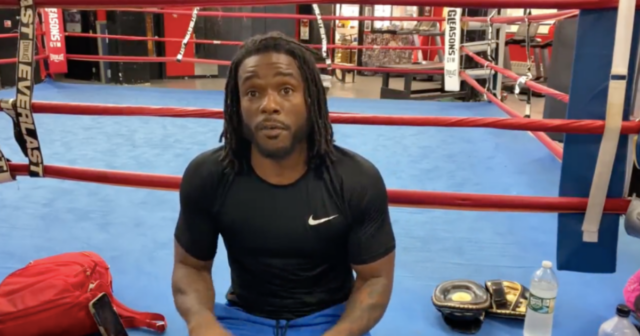 HASIM RAHMAN JR said he is ready to fight Jake Paul NEXT WEEK – and at their original weight of 200lb.

The pair of former sparring partners were due to face each other this weekend at New York’s iconic Madison Square Garden.

Rahman signed to fight at the 14st 4lb cruiserweight limit of 200lb, despite being 16 stone in his last fight in April.

But Rahman denied the allegations and staged a private weigh in to prove he could make the new 205lb limit.

The heavyweight actually came in at 206.6lb – nearly 2lb overweight – but called to fight Paul next week – believing he can make 200lb.

“But had the fight been next Saturday, I probably would have made 200. But you know, it’s unfair that he pulled the plug like that.”

Paul, 25, initially announced his boxing return for August 13 but changed it to a week earlier after signing to fight Tommy Fury, 23.

Although Fury was forced out amid a US visa issue, which caused Rahman to step in.

After the NYSAC changed the weight to 205lb, Rahman had until 11.59pm to sign a deal for a new agreement.

He accused Paul of cancelling the fight four hours beforehand, giving him no chance to commit to the fresh terms.

But SunSport understands Paul’s team were informed hours before the public cancellation that Rahman could not make the weight.

And Showtime executive Stephen Espinoza – who was putting the PPV on his platform – added to this claim.

Espinoza tweeted: “He repeatedly assured us he would make 200. He signed a contract saying he’d make 200.

“And he sent us a video showing that he weighed 216 when he signed the contract a month before the fight. Shame on us for believing him.”

Jake Paul and Hasim Rahman Jr before their fight cancelation