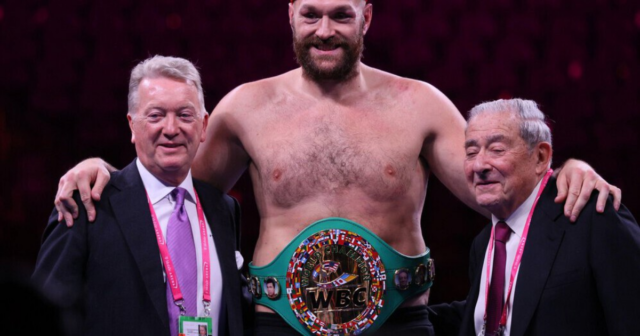 ANTHONY JOSHUA hit out at Bob Arum and said Tyson Fury’s US promoter ‘talks a lot of s***.’

Hall of Famer Arum has been critical of AJ in the past and recently said he could ‘NEVER’ beat Oleksandr Usyk.

The Top Rank boss also urged Joshua to step aside from a rematch with Usyk to allow Fury to fight the Ukrainian.

But AJ appeared uninterested in Arum’s opinion and blasted the legendary promoter for the prior digs.

“I’m not interested in what Bob Arum has to say.”

Fury, 33, was set to fight Joshua, 32, this summer until he was ordered by an arbitrator to instead honour his contracted trilogy bout with Deontay Wilder.

The Gypsy King later scored a dramatic 11th round knockout of Wilder, 36, but two weeks earlier Joshua, 32, was dethroned by Usyk, 34.

AJ has already invoked his right to an immediate rematch and has spent time in America trialling coaches to add to his team.

But his chances of winning against Usyk were blasted by Arum, with or without a change trainer.

Arum said to Fight Hub TV: “Whatever new trainer he gets, he ain’t gonna beat Oleksandr Usyk. Not now, not next year.

“Usyk is too smart for him and he’s a southpaw. Joshua is not going to learn in six months what he never learned, which is how to fight a southpaw.”

Did you miss our previous article…
https://www.sportingexcitement.com/boxing/black-history-month-2021-boxer-denzel-bentley-wants-better-teaching-as-dudley-stokes-recalls-racism-suffered-in-army