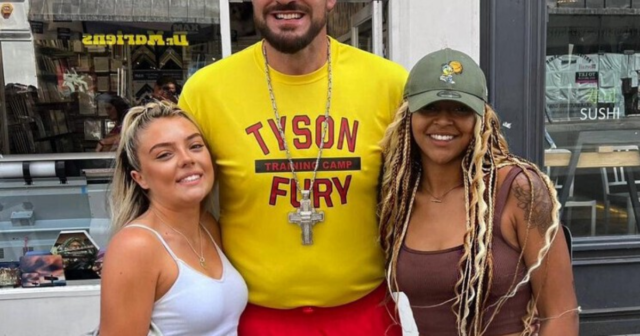 WBC world heavyweight champion Tyson Fury showed off his fancy footwork as he began to dance for two buskers in the middle of Newcastle.

Jenna Cole, 20, and Olivia Irvin, 22, couldn’t believe it when the unbeaten boxing legend asked to hear their tunes.

Fury posed for pictures with the two buskers in Newcastle

Fury was surrounded as he listened to the two buskers 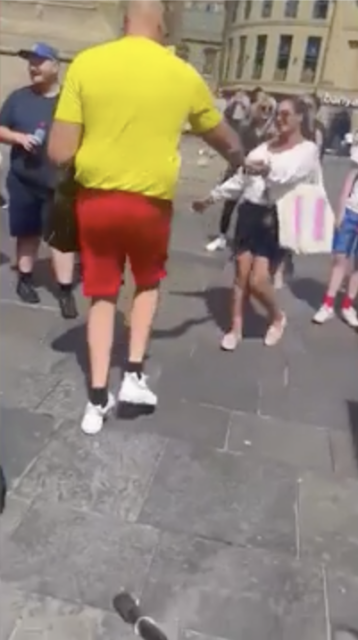 One lucky fan was invited to dance with Fury 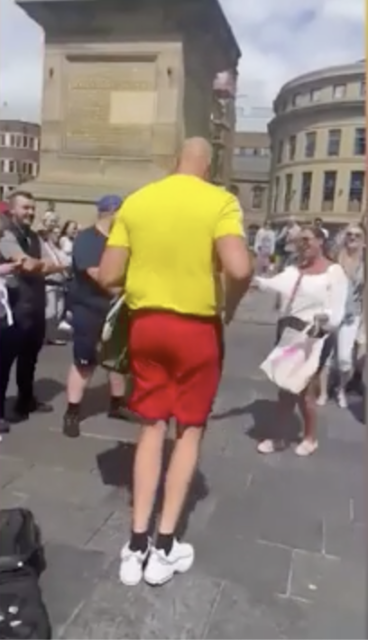 The pair watched as he danced in the street near Monument with fans to four of their songs.

And Jenna initially believed he was a lookalike due to him wearing a ‘Tyson Fury‘ t-shirt.

She said: “He was dressed like a lifeguard, I thought he was a lookalike. Lots of people started getting pictures and I just didn’t say anything to him.

“He came over to me and said ‘Are you a singer?’ I thought that’s Tyson Fury, I could tell by his voice.

“He said ‘I love street performers, what type of music do you play?’ I said ‘Reggae, hip hop, Fleetwood Mac, 80s’ and he said ‘Unreal’.

“I told him I wasn’t starting yet as I was in a duo and he said ‘I’m going to go and buy some trainers from JD and I’ll come back and I’ll watch you.’

“He walked away from me and I was like what on earth, I was really disorientated.

“I ran to the shop where Liv was and I was standing outside fidgeting.

“I said ‘Tyson Fury has just said he’s coming back to watch us’. I was nervous but I was also excited to sing for him.”

Fury returned after visiting a sports shop and they played Bob Marley songs ‘Is This Love’ and ‘Could You Be Loved’.

She said the two-time world heavyweight champ began to video them performing.

He was also dancing in the street and posing for pictures with fans.

Jenna continued: “He was stood dancing with us and videoing us and he was really impressed. Everyone started swarming to him. It was honestly great, it was so surreal.

“It got us both really buzzing. For him to stand for four songs, he must have liked it.”

Fury stayed for four songs before making his way down the street.

Jenna decided they couldn’t let him leave without getting a picture and they ran after him.

She said: “We thought we are going to have to get a picture we can’t let everyone else get one and not us. We stopped out song half way through and pegged it after him up the street.

“One of the guys he was with was saying ‘no more pictures’ but he said ‘let the singers have a picture’. He was nice, he was dead down to earth.”

Jenna concluded: “It was great that he was able to come and see that and recognise it. It’s nice to have a bit of recognition from someone who’s famous.”

Fury is enjoying “retirement” and will only be tempted to step back inside the squared circle by a mega heavyweight world title unification fight.

The Gypsy King insisted he was hanging up his gloves after knocking out Dillian Whyte at Wembley in April.

However, he left fans baffled having retired, then saying he will return for a £200million bout with Anthony Joshua, then making a U-turn on that to suggest he would only be interested in exhibition events.

He has now claimed he would take on his fellow Brit – for the audacious sum of £500m.