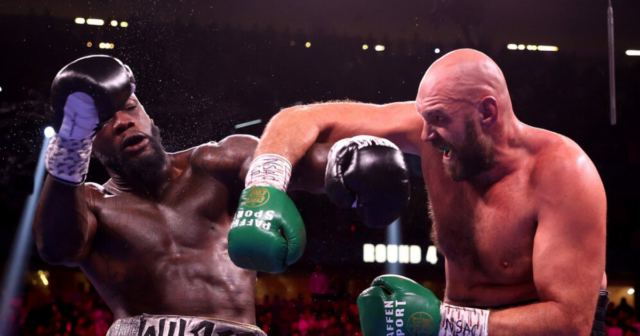 DEONTAY WILDER could incredibly be handed another shot to win back the WBC heavyweight title if Dillian Whyte refuses to fight Tyson Fury.

The Bronze Bomber, who has failed to beat the Gypsy King in their three encounters, was knocked out in devastating fashion in their October trilogy bout.

Fury was then ordered to defend his strap against British compatriot Dillian Whyte, who is the governing body’s interim champion.

But negotiations for the domestic dust-up have been delayed due to rows over money, with the Body Snatcher seeking a 40 per cent split.

Whyte took the WBC to an arbitration case in a bid to get his potential pay packet increased.

Fury’s US-based promoter Bob Arum then revealed that the unbeaten Mancunian was given permission by the WBC to seek a new challenger due to Whyte’s hefty demands.

On Thursday it was announced that Fury would only have to give the former British champion 20 per cent of the purse of their potential showdown.

If the Jamaican-born knockout turns down the chance to meet Fury inside the squared circle, the WBC could look down the rankings to sort out a new fight.

And incredibly, Alabama native Wilder is No1 in the list.

Though it remains to be seen whether the American would take on his rival for a fourth time after he teased retirement earlier this month.

Should the fight pass to Wilder and he too rejects the opportunity, Joe Joyce could be handed a shot at the famous belt.

The 2016 Olympic silver medallist is No2 in the WBC rankings, and a bout between him and Fury would be easy to make as they both share the same promoter in Frank Warren.

Again if that potential encounter falls through, Andy Ruiz Jr would be next in line.

And Arum has already insisted that the Destroyer is a potential option for Fury in 2022, along with Finland’s Robert Helenius.

Fury is unlikely to secure an undisputed match-up next if he doesn’t fight Whyte as unified WBA, WBO and IBF champ Oleksandr Usyk is set to defend his straps in his rematch against Anthony Joshua.