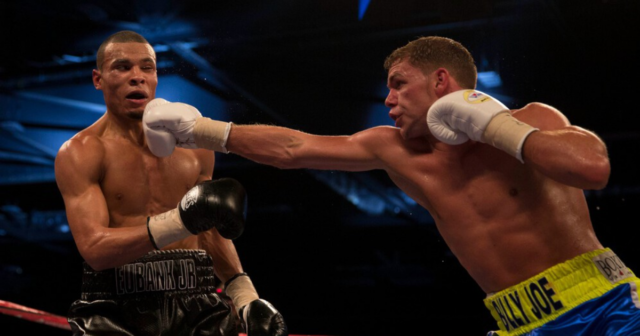 But the 32-year-old doesn’t reckon it would last long if the feuding pair do step into the ring again.

Saunders won a split decision when the pair met back in 2014 but recently suffered a thumping loss to Canelo Alvarez.

Rumours have been swirling around a possible Saunders retirement, but the former two-weight world champ insisted he is eyeing another Eubank scalp.

He told IFLTV: “Do I think I can do the weight comfortably? It doesn’t matter if I can do it comfortably or not with him. I could do it half dead and still beat him.”

Promoter Ben Shalom and Sky Sports’ head of boxing Adam Smith have been in talks with Saunders over a potential rematch.

Shalom said: “Billy Joe really wants this fight because he knows Chris has gone from strength to strength since they last fought.

“It’s a huge pay-per-view fight, it’s a huge night. But Billy Joe has got a lot of work to get back, he obviously suffered a big defeat.”

Eubank Jr still disputes his points loss eight years ago and is motivated to settle the score once and for all.

He said: “I don’t think much of him at all, as I’m sure you guys know. But is it a fight I would take? Yes.

“The fight has everything, it has a story, it has two top-tier fighters who don’t like each other. Who doesn’t want to see that fight?

“I don’t know, he doesn’t have anything to offer but the defeat that was gifted to me all those years ago.

“But if the offer is there and it’s the right time and the right place and the business makes sense, then let’s do it.”

Advertisement. Scroll to continue reading.
In this article:billyjoe, eubankjr, thering