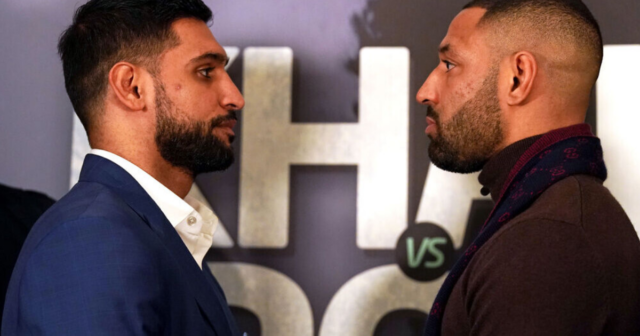 AMIR KHAN insists Kell Brook has no chance against Mr Clean in next month’s grudge fight.

The millionaires — both 35 — will finally do battle to settle a decade of bad blood on February 19.

Amir Khan and Kell Brook ahead of their February 19 fight

Former light-welterweight world champion Khan has agreed to let ex-welterweight champ Brook meet him at the catchweight limit of 149lbs in Manchester.

And the devout Bolton hero reckons his Sheffield rival has enjoyed himself too much out of the ring to challenge his legacy.

Khan said: “When you look at my life outside of boxing, I live a reasonably clean life and that will help me.

“I’m 35, Kell is a very similar age to me, but I think Kell’s lifestyle is very different to me.

“We live opposite life-styles. I am a family man who doesn’t drink alcohol, I live that clean life. Whereas I don’t think Kell does.”

Brook put in a career-defining display in 2014 when he ripped the IBF title away from hometown favourite Shawn Porter in the States.

But accusations of ill- discipline have dogged him and he has often ballooned up in weight between bouts.

And Khan reckons he saw signs of that last November at their first press face-off.

Khan added: “What got me to where I was was hard work, dedication, discipline and focus.

“We know Kell is one of these guys who can go off the rails after a fight. He’ll go missing for a couple of weeks and put on a load of weight.

“If you saw him at the press conference he looked very unfit and unhealthy.

“I doubted then he’d be in the best condition in ten weeks, when the fight comes around, whereas I had already been in training for the last couple of months.”

Did you miss our previous article…
https://www.sportingexcitement.com/boxing/tyson-furys-promoter-prepared-to-discuss-deontay-wilder-vs-rising-us-star-jared-anderson-by-the-end-of-this-year