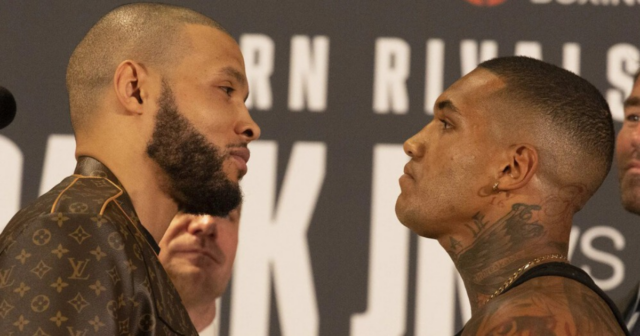 The 32-year-old Brighton middleweight will boil down to 157lbs to face the 25-year-old career welterweight.

The October 8 02 sell-out will come almost 30 years since their fathers went to war for a second time, ending in a controversial draw, after Eubank had won the original 1990 battle.

Nigel Benn is jetting in from Australia to live and train alongside his son for the mouth-watering showdown.

While Eubank Jr wants his dad in his corner but has been unable to track his eccentric dad down since the second-generation battle was confirmed last week.

But Eubank insists his seven years seniority and experience at the top level – in domestic wars with Billy Joe Saunders, George Groves and James DeGale – mean he will make a boy out of Benn.

“I will be his fatherly figure in the build-up and at the fight,” the super-confident Brighton man said.

“I will take him to school, walk him through the doors, sit him down and teach him everything he needs to learn.

“My advice is ‘get sparring partners who are going to really hurt you for the next eight weeks’ that’s his best shot at beating me.

“The pain I will put him though needs to be matched in sparring or it will be too much of a shock to his system.

Looking directly over at his rival, he said: “You need tough sparring to condition you for the beating I am going to give you on October 8.”

Benn is using the emotional edge as a fuel – on top of his extra pasta and peanut butter for bulking up – while Eubank Jr is trying to keep it strictly business.

“I don’t hate anyone,” he said. “I would never give anyone the power of me hating them, hate is too strong a passion.

“I don’t even dislike Conor, he has done nothing to me personally. But this fight is personal.

“Nothing like this has ever happened before in the history of the sport, two legends who went into a ring 30 years ago and inspired a nation, became superstars, etched their names into british history – not just boxing.

“17million people watched them fight twice and 30 years later their sons are going to get in the ring and go to war for a third time.

“It has never happened before and it will never happen again, that’s the main reason I wanted to be a part of this. It is very exciting.”

Benn is putting his welterweight world title plans on hold for the genetic duel.

But he’s cocksure he will be the first man to stop Eubank Jr and will then return to the 147lbs ranks as a bonafide box-office superstar.

“This fight makes sense for now,” he said to the critics who fear he’s cashing in too soon.

“A world title is the goal but this is a fantasy fight for the public.

“We were far apart at the start of my career but he was still always mentioned as a future opponent, even before my debut.

“And now the stars have aligned for October 8”

Benn – like his legendary Dark Destroyer dad – is still angry the 1993 Manchester clash was called a spit-decision tie when the Londoner seemed to edge the action.

And he will use that as motivation, watching reruns of the two-fight rivalry throughout the two-month build-up, to make the level the family feud at 1-1.

He said: “We have both walked the same road and I respect all fighters.

“But we settle the family business in there.

“The last fight was called a draw and now I set the score straight.”