I’m going to get messy with England fans after I beat Derek Chisora – I’m a devil for the drink, says Tyson Fury
Advertisement 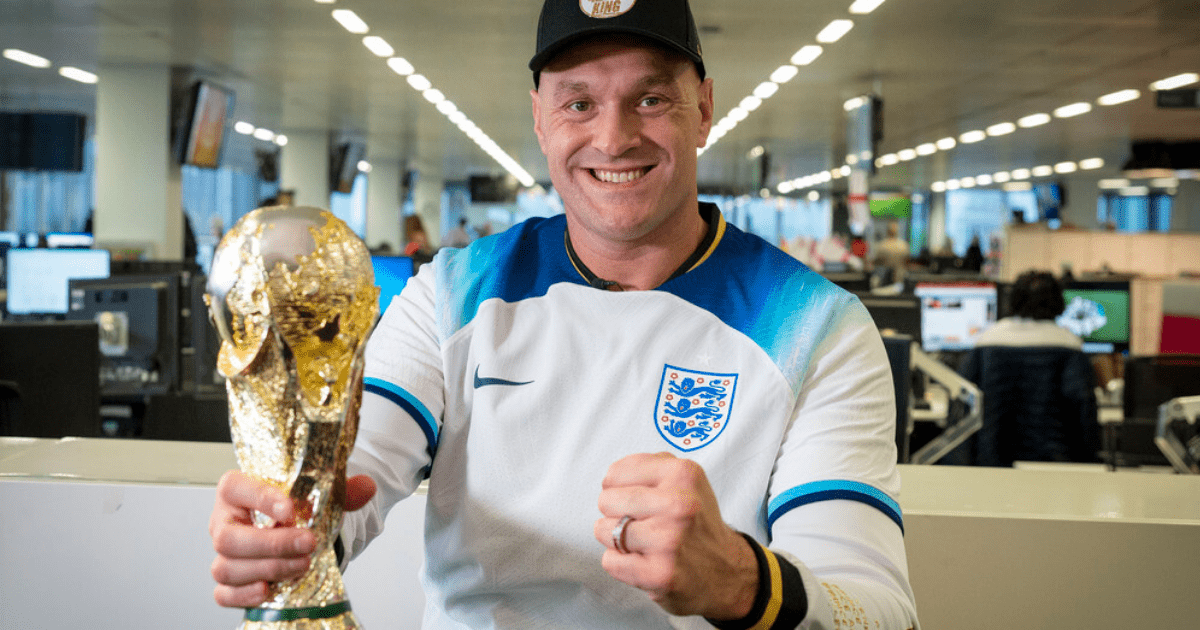 HEAVYWEIGHT champ Tyson Fury has told SE he will knock out Derek Chisora — then watch England knock Senegal out of the World Cup.

The Gypsy King, 34, is so confident the Three Lions will win their last 16 clash that he’s planning to fly to Qatar for the quarter final. 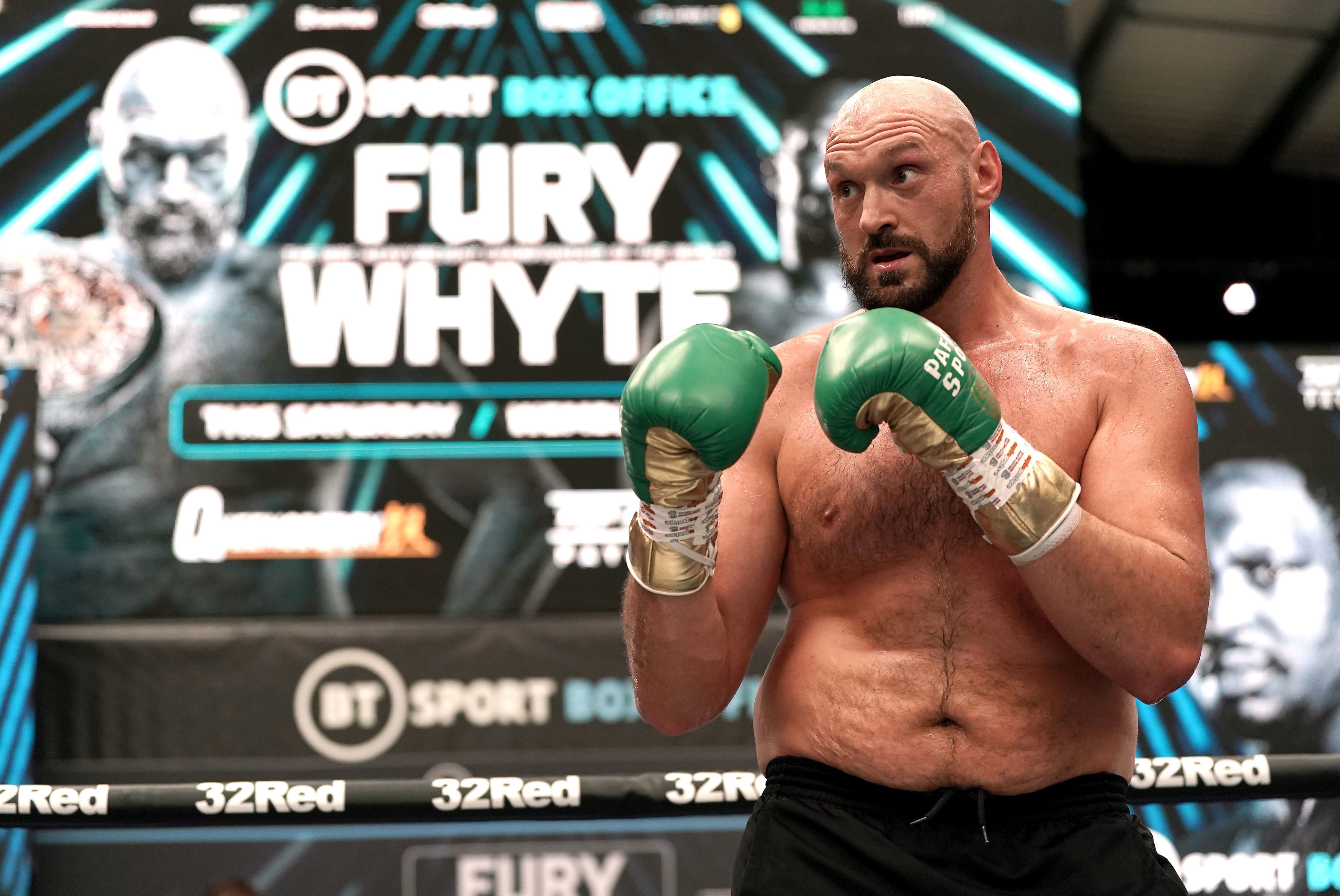 And he said of his fight at Tottenham Hotspur Stadium: “I’m looking forward to putting on a show. I’m feeling fantastic. I always win and so will England.”

Tyson Fury has vowed to defy the World Cup booze ban and bring beer into the stadium for a potental England quarter final.

The boxing champ has laid off the alcohol ahead of his big fight with Brit rival Derek Chisora.

But he said he’ll “get messy again” in Qatar when rather than if Gareth Southgate’s team beat Senegal in tomorrow’s last-16 clash.

On a visit to the Sun HQ, heavyweight legend Tyson, 34, joked the alcohol ban at the stadiums was “no bother” for him.

“I’m not an alcoholic, I’m just a devil for the drink.”

He plans a “wild lads’ holiday” at the football without wife Paris, 32, or their six children.

“I’m going to sneak a few cases in my suitcase.

“They can have anything they want — whatever gets them going.

Tyson also wants to meet skipper Harry Kane and the Three Lions players for a pep talk to spur them on in a potential quarter final against France or Poland.

He said: “I would tell them forget about what you’re thinking, just go and f***ing win.”

And his message to them before tomorrow’s Senegal game would be: “You’ve done all the hard work to get into this position so just go out there and enjoy the game.”

Singer Chesney Hawkes also visited SE yesterday after England dubbed him their lucky mascot following his half-time performance during their Group B win over Wales.

Tyson duetted with Chesney at our HQ and said of our plan to fly the singer back to Qatar to play his hit The One and Only: “Fantastic stuff. Get him back out there. He can take me.”

“It’s only a four week period. If I can get through that then January we will be here and back to work.

Despite his planned boozy antics at the World Cup, Tyson has revealed he will stay sober for Christmas, saying: “I’m going to try and stay away from the alcohol and eat sensible and eat clean.

“It’s only a four-week period. If I can get through that then January we will be here and back to work.

“I intend to just stay on the straight and narrow and spend time with the family.”

Fury claimed to be retired after beating Dillian Whyte in April.

But he returns to fight Chisora — who he has beaten twice before — at Tottenham Hotspur Stadium in North London.

Tyson admitted: “I was very bored. It was a short retirement.

“Paris wanted me out of the house. She’s happy I’m back.”

But he says he will retire in a year and will become a used-car salesman in Morecambe Bay, Lancs, where he owns a £1.7million house.

Tyson, married for 14 years, wasn’t able to spend his anniversary with Paris as he was training.

He said: “I sent her flowers but you have to make sacrifices for success. There are no secrets to getting it to work.

“From my side just say ‘yes’. A happy wife is a happy life.”

On his ring return, he added: “My real reason is I need to keep myself well in my mind. 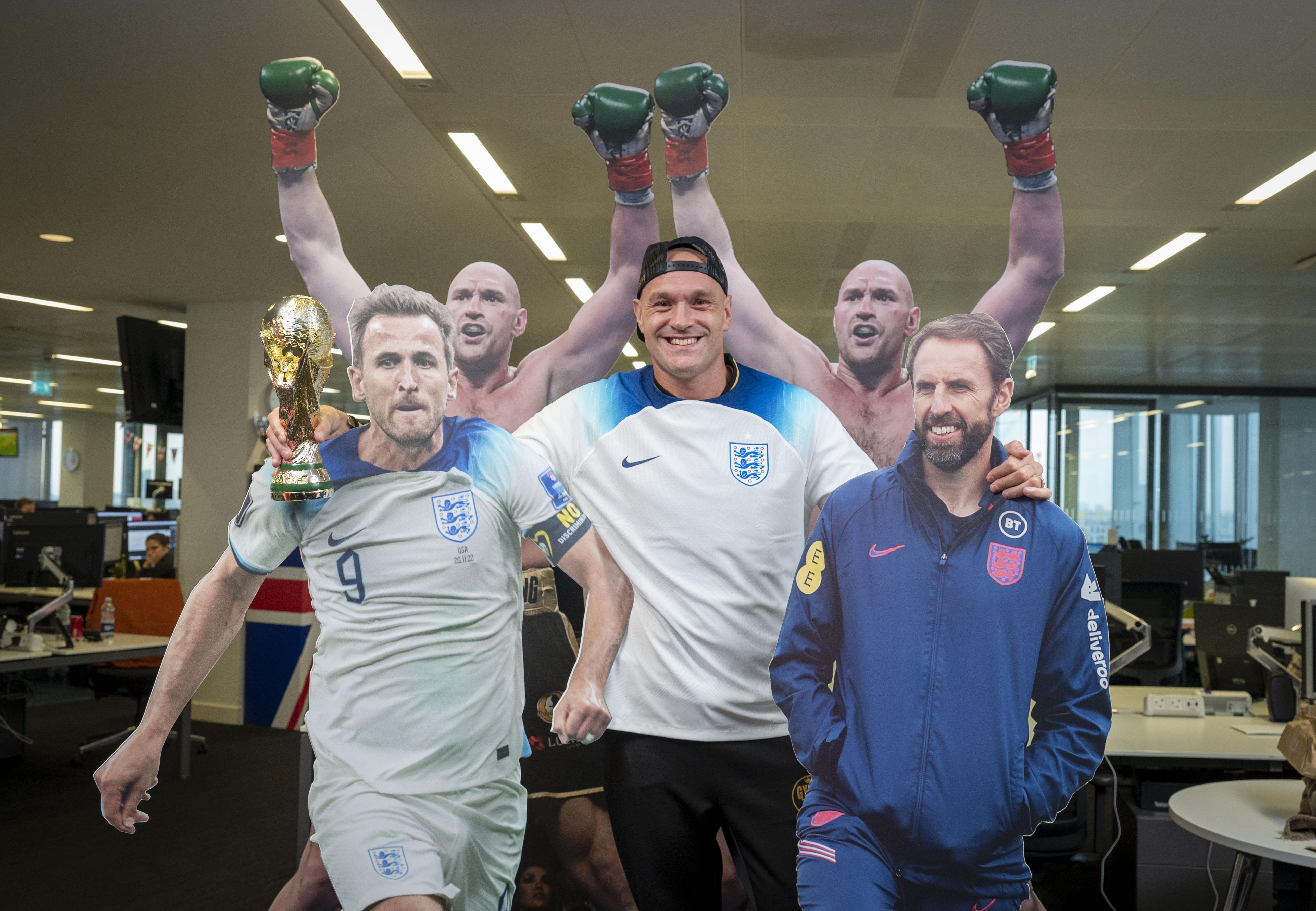 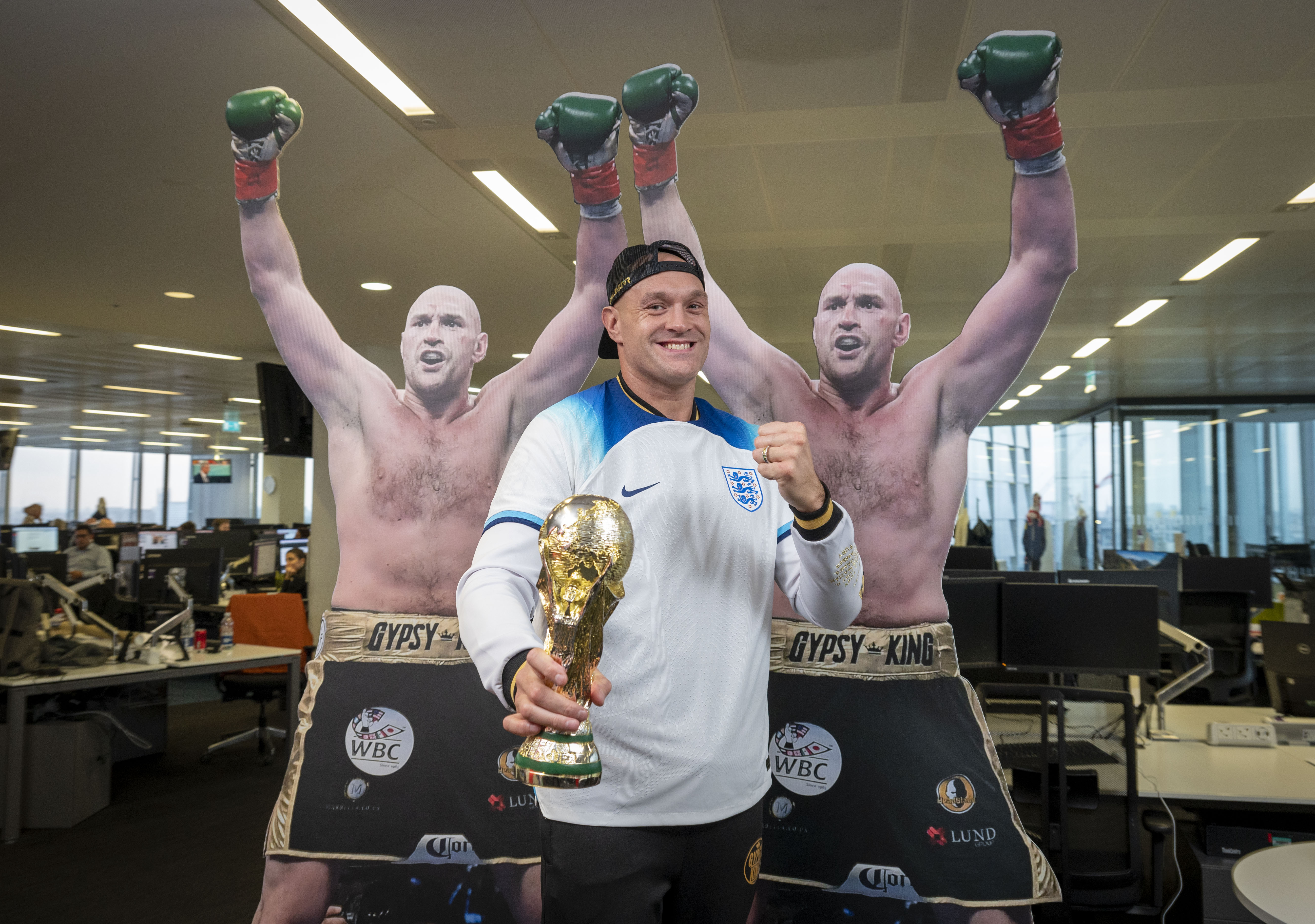 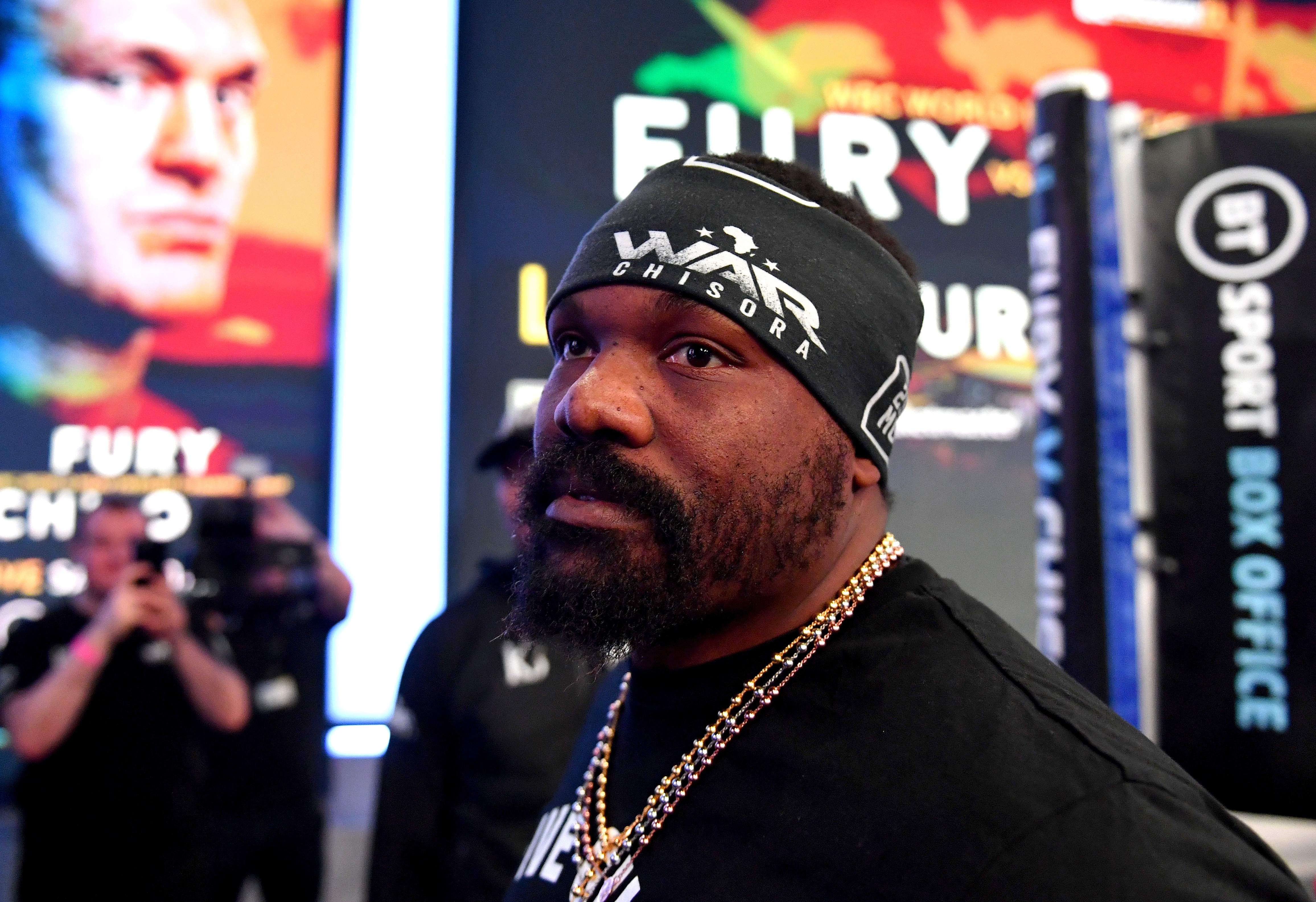 “When you come across someone in their early or mid-20s who is fighting because they need to get off the streets and it’s do or die, then you have a problem.

“There’s nothing that I can achieve, I’ve won every belt there is to win.

“I’ve not got any thoughts. I’ve fought for a lot of things in my life.

You must protect your head whenever you are attacked. Your goal is to avoid getting punched in the first place. To do so, you need to know how to block an incoming punch. Here’s how to do it:

Boxing trainers usually work out at least 4 hours a day. They also spend time studying boxing techniques, learning new moves, and practicing their punches. Boxers can spar up to 10 times per week.

Boxing can be learned in 3 months. It takes 3 months to learn the basics of boxing, including footwork, stance and balance. Remember that boxing is more than just throwing punches. It’s important to be able to block and dodge punches.

Watching good boxers fight is the first step to improving your boxing technique. You should observe how they move, throw punches and defend themselves. You can then try to imitate them.

Next, you will need to spar against another fighter. This is where you’ll see whether you’ve improved your boxing technique. You’ll notice how fast and strong you punch, as well as how effective you are at blocking incoming punches, when you spar.

You learn boxing to increase your physical fitness and self-confidence. Boxing is the most well-known sport in the world. It requires strength and speed as well agility, coordination, balance, power, and accuracy.

There are many types of boxing training programs. Some are held at health clubs or gyms, while others can be done at home. You can also study online from any location in the world.

Advanced programs last approximately six months and typically cost $300. These programs often include nutrition advice, stretching routines and warm-up exercises. They also provide instruction on proper technique. Some programs include resistance training, such as lifting weights, and aerobic conditioning, such as running.

Advertisement. Scroll to continue reading.
In this article:englandfans, getmessy, thedrink